Governor Andrew M. Cuomo has announced the final deployment of rail cars to the state’s artificial reef network for 2020 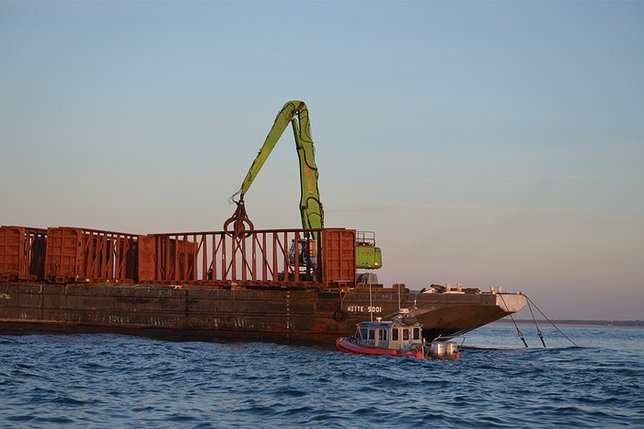 “New York has been a national model for protecting the environment, while helping stimulate economic growth, and our work to advance the state’s artificial reef network is a key component of those efforts,” Governor Cuomo said. “Not only does the continued expansion of our reefs help marine life and habitats thrive, but it will also strengthen Long Island’s fishing, tourism and recreation industries which play an essential role in local economies all along the shoreline.”

The rail cars used for the reef expansion are cleaned to mitigate potential impacts to sea life before being deployed to the reef sites. Once the rail cars settle to the sea floor, larger fish, such as blackfish, black sea bass, cod and summer flounder, move in to inhabit the new structures, and encrusting organisms such as barnacles, sponges, anemones, corals, and mussels cling to and cover the material. Over time, these recycled structures create a habitat like a natural reef.

The 35-acre Shinnecock Reef is located two nautical miles south of Shinnecock Inlet with a depth of 79-84 feet. Prior to the reef expansion, this reef was comprised of eight vessels, four barges, surplus armored vehicles, one drydock, rock, a steel and concrete tower, Tappan Zee bridge materials, steel and concrete bridge rubble, steel pipes, steel beams, and steel bridge trusses. State Department of Transportation (DOT) and New York Power Authority (NYPA)/Canal Corporation materials deployed at this reef in May 2018 include:

The 14-acre Moriches Reef is located in the Atlantic Ocean 2.4 nautical miles south of Moriches Inlet. DOT, NYPA/Canal Corporation, and the Thruway Authority materials deployed in August 2018 and October 2018 to develop this reef include:

New York State Department of Transportation Commissioner Marie Therese Dominguez said, “The State Department of Transportation is proud to work with our sister agencies on this important program, repurposing transportation materials to expand artificial reefs and support biodiversity, fishing and tourism. It is another example of how New York State, under Governor Cuomo’s leadership, is taking bold steps to protect our ecosystems and foster sustainable economic growth that will benefit current and future generations of New Yorkers.”

NYPA President and CEO Gil C. Quiniones said, “NYPA and the Canal Corporation are proud to have a role in the Governor’s Artificial Reef Program. This innovative program is beneficial to the environment and our shorelines and offers new recreational opportunities for fishermen and divers as well as local economic benefits to our shoreline communities.”

In his 2020 State of the State address, Governor Cuomo committed to doubling New York’s existing reef acreage by expanding seven of 12 existing sites and creating four new artificial reefs in Long Island Sound and the Atlantic Ocean. This expansion will be complete by 2022. In April 2020, DEC finalized a Supplemental Generic Environmental Impact Statement (SGEIS) for the Artificial Reef Program to address advancements in science and expertise relating to artificial reef development. The SGEIS proposes expanding, creating, and continuing use of reef sites along New York’s shores. The first Generic Environmental Impact Statement (GEIS) and Artificial Reef Plan was developed in 1993.

Earlier this month, the State released the Notice of Complete Application to expand seven of New York’s 12 existing artificial reef sites and create four new sites for public review and comment. The Notice of Complete Application posted in DEC’s Environmental Notice Bulletin and on the artificial reef website here. DEC is accepting public comments on the proposal to grow the State’s Artificial Reef Network through Jan. 15, 2021.

New York’s marine resources are critical to the state’s economy, supporting nearly 350,000 jobs and generating billions of dollars through tourism, fishing, and other industries. More than 500,000 anglers in the region will reap the benefits of the Governor’s initiative, supporting the region’s growing marine economy which accounts for approximately 9.7 percent of Long Island’s total GDP. Artificial reef construction is part of Governor Cuomo’s NY Open for Fishing and Hunting, an effort to improve recreational activities for in-state and out-of-state sportsmen and sportswomen and to boost tourism opportunities throughout the state. For more information about DEC’s Artificial Reef Program visit DEC’s website.

New York’s Artificial Reef Program is an example of the Governor’s commitment to restoring marine ecosystems and economy. Coupled with the nation’s largest offshore wind agreement, record investments in the Environmental Protection Fund and Clean Water Infrastructure Act, a ban on offshore drilling, passage of the ‘bunker bill’ to prohibit the use of purse seines to protect this keystone species, continued progress on the Long Island Shellfish Restoration initiative, and other programs to protect and improve water quality, the Governor’s efforts are realizing a cleaner and healthier marine environment for all New Yorkers.