The directors of ‘Islam & the Future of Tolerance,’ Jay Shapiro and Desh Amila, are Tom Needham’s guests on ‘The Sounds of Film.’ 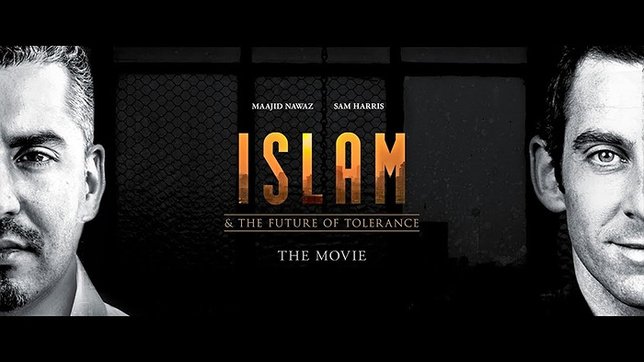 Photo by: Courtesy of Think Inc.

Stony Brook, NY - December 18, 2018 - Jay Shapiro and Desh Amila, the directors of a new film featuring Sam Harris and Maajid Nawaz called ‘Islam & The Future of Islam,’ are Tom Needham’s exclusive guests this Thursday at 6 pm on WUSB’s ‘The Sounds of Film.’
‘Islam & The Future of Islam’ tells the story of prominent atheist philosopher Sam Harris and Islamist-turned-liberal-Muslim Maajid Nawaz. After publicly fighting over the idea of Islamic reform in the Muslim world, they decided to reunite several years later in order to have an honest and thoughtful conversation about the topic. Through their discussion, they attempt to examine their disagreements about troubling passages from the Quran, the importance of precise language, and the dangers of this current politically correct environment. The film emphasizes the importance of conversation and tolerance when dealing with difficult modern issues.
Sam Harris is a popular author and the host of the ‘Waking Up’ podcast. His work frequently touches on topics like free will, neuroscience and artificial intelligence.  He is the author of ‘The End of Faith,’ ‘Letter to a Christian Nation,’ and ‘Free Will.’
Maajid Nawaz is a British activist, author, columnist, and broadcaster. He is the founding chairman of Quilliam, a think tank that challenges the ideas of Islamist extremism. His work is informed by years spent in his youth as a leadership member of a global Islamic group, and his gradual transformation toward liberal democratic values. Maajid‘s autobiographical account of his life, ‘RADICAL’ is available in the UK and US.
About the Sounds of Film
‘The Sounds of Film’ is the nation’s longest running film, music and issues related radio show. For the past 30 years, the program has delivered a popular mix of interviews and music to listeners all over Long Island, parts of Connecticut and streaming worldwide live on the internet.  Previous people interviewed for the show include Dave Rubin, director Susan Lacy, Thora Birch, writer Andrew Solomon, Dr. Jordan Peterson, philosopher Peter Singer, director Michael Cuesta, and composer Junkie XL.