The USPS is helping kids all over the country get a letter from Santa Claus. 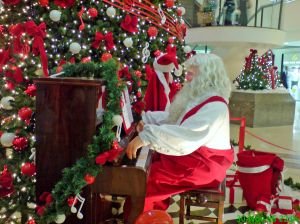 Every year millions of children around the country write letters and wish-lists to send up to the North Pole, hoping to find their most wanted toys and goodies under the Christmas tree on December 25th. The generations-old tradition still delights kids and parents alike, but with the help of the USPS children can now get a letter back from old Saint Nick.

Parents who want to add a little extra magic to the holiday season can write a letter, sign it “From Santa,” and have it sent back to their homes in time for Christmas. The United States Postal Service asks participants to address these letters to their children and mark a return address of “Santa, North Pole” on the envelope with a first-class stamp, then place both into a larger envelope addressed (with appropriate postage) to the North Pole Postmark Postmaster at 4141 Postmark Dr, Anchorage Ak, 99530.

As long as the letter is mailed by December 10th, Santa’s helpers in Arkansas will get the “Letters from Santa” back to their intended recipients by Christmas, letting children know that Santa Claus is indeed coming to town.

This year marks the 101st anniversary of the official Letters to Santa program, but the USPS says it has been receiving Christmas letters for well over a century.