Charlene J. Thompson, Esq. was selected by the Long Island African American Chamber of Commerce, Inc. as its Small Business Person of the Year for her outstanding work in the area of Minority Women Business ... 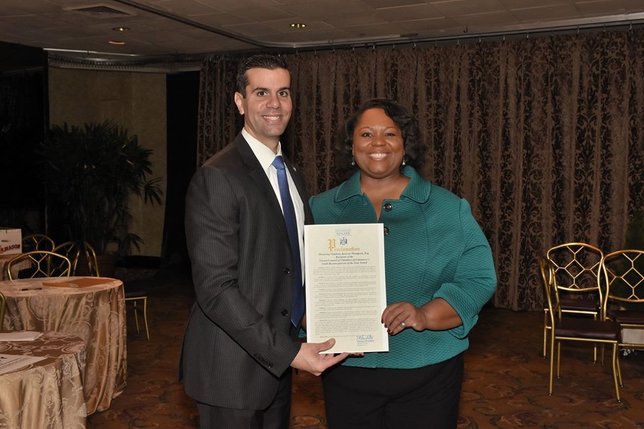 About: Ms. Charlene J. Thompson, Esq. President and CEO Thompson Economic Development Services, LLC attended Howard University School of Law in Washington, D.C., graduating cum laude in 1994. She also earned American Jurisprudence Awards for Academic Excellence Property I and Professional Responsibility. In addition to her academic studies at Howard, Ms. Thompson served on the board of directors of the D.C. Law Students in Court program, the Moot Court team and was Co-editor-in-Chief of the Howard Scroll: Social Justice Review. Ms. Thompson has been a member of the Nassau County Bar Association for more than 20 years and currently serves as a member of the Board of Directors. She has also served as a Representative to the New York State Bar House of Delegates and Chair of the Membership Committee from 2005-2008. Ms. Thompson was recipient of the 2006-2007 NCBA's Directors Award for outstanding service as Chair of the Association Membership Committee. Ms. Thompson has also been an active member of the Amistad Long Island Black Bar Association where she served as Vice President of Programs and Commissioner on the 10th Judicial District's Independent Judicial Election Qualification Committee.

From 2006-2010 Ms. Thompson also served as an Adjunct Professor in the Politics, Economics and law Department at SUNY Old Westbury. Her coursework included Constitutional law and Civil Rights, the Politics of Race and Class in America, Introduction to U.S. Politics and Introduction to Law. She also served as a pre-law advisor and administrator of the Pre-law Center for the Department.

In 2010, Ms. Thompson launched her consulting firm, Thompson Economic Development Services, LLC, focusing on revitalization and economic empowerment of long Island's neediest communities. She serves as co-chair of the Law and Government Committee of the long Island Housing Crisis Task Force which focuses on bringing much needed information and housing resources to residents of Nassau and Suffolk counties. She also serves as chair of the M/WBE Committee for the long Island African American Chamber of Commerce which works with underrepresented business owners to build capacity to successfully participate in government contracting opportunities.

The 2015 NCCC Legislative and Small Business Person of the Year Breakfast brings together more than 52 local Chambers of Commerce. The event was attended by more than 600 people, including many State and County legislators, mayors, and appointed officials, drawing together all the makers and shakers of the business community.

Nassau Council of Chambers of Commerce is an umbrella organization of 52 local Chambers of Commerce representing 6,000 businesses, it their mission at this event to honor those that promote business in Nassau County and address the issues that may impact them. NCCC prioritizes and pursues those issues at the appropriate level of government, using various forms of media and advocacy.

For more information regarding membership, corporate sponsorship opportunities, or to be placed on the Email list of the Long Island African American Chamber of Commerce, Inc. email or call 347-475-7158. You may also log on to www.liaacc.org for online membership or to contact the chamber.