Ho, Ho, Ho, SantaCon is Coming to Town of Riverhead!

This year, instead of making the trip all the way to NYC for their annual SantaCon, head to Riverhead for their 1st ever SantaCon! 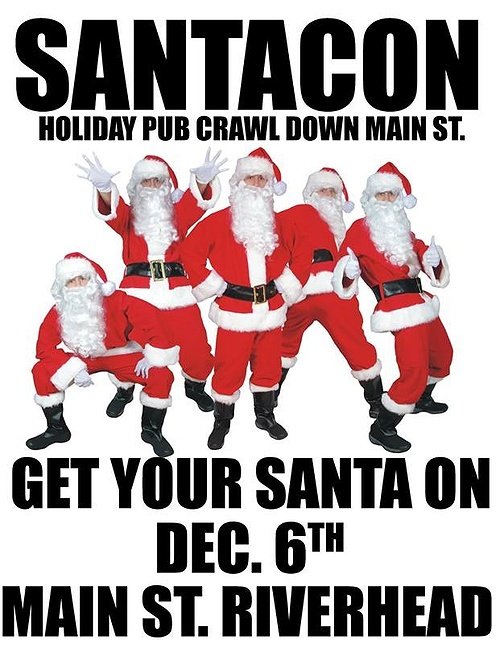 Every year in December hordes of people dress up in Santa, elf and other festive holiday character costumes and make their way over to New York City for the annual SantaCon. For those of you whose Facebook news feeds haven’t been inundated with pictures of people walking around NYC all dressed as Santa Claus before, SantaCon is a bar crawl described by its own organizers as, “A charitable, non-commercial, non-political, nonsensical Santa Claus convention that happens once a year for absolutely no reason.” You can donate online at their website and the proceeds go to various charities and causes around New York. This year though, instead of trekking all the way out to the City, Long Island will be having its own charitable SantaCon!

On December 6th of this year 9 different bars and restaurants down Main Street in Riverhead will be participating in this first ever Riverhead SantaCon. The merry event will help raise money for New Beginnings Community Center for The Brendan House Project, a campaign that raises awareness for Tramatic Brain Injury and other physical and cognitive disabilities.

Participating businesses and vendors of the pub crawl are The Suffolk Theater, Joe’s Garage, Vines and Hops, Tweeds, Digger O’dells, Crooked Ladder Brewing Company, Hotel Indigo, Cliff’s Rendezvous and Jerry and the Mermaid. There will be special activities and promotions at each stop of the pub crawl.

Riverhead SantaCon will be held on December 6th from 3 p.m. to midnight. Bracelets for the event are $10 and will be sold, if you’re paying cash, at any and all of the stops on the route. If you’re paying with a credit card you can purchase your bracelet online or over the phone through The Suffolk Theater’s Box Office.

Click here for more information, and to purchase your tickets online!