Updates to the 2009 law will go into effect tomorrow. 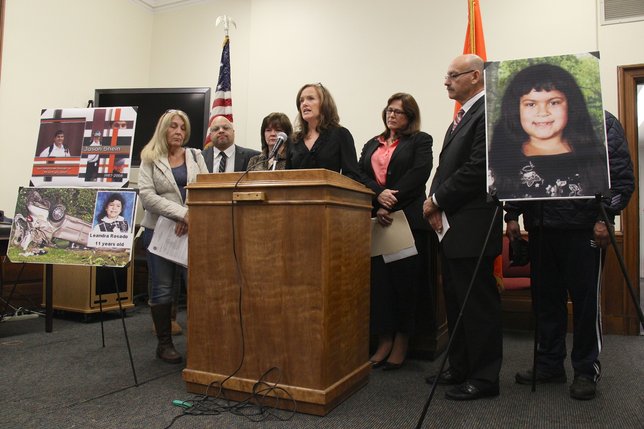 Mineola, NY - October 31st, 2013 - Nassau County District Attorney Kathleen Rice was joined by drunk driving victims and advocates, including the father of Leandra, after whom “Leandra’s Law” is named, to announce changes to Leandra’s Law that will go into effect on Nov. 1.

“We’re one of the toughest states in the country on drunk drivers, and tomorrow we’re going to be even tougher,” said DA Rice, whose office helped draft Leandra’s Law and its new update with sponsors State Senator Charles Fuschillo and Assemblyman Harvey Weisenberg. “These updates to Leandra’s Law will help us keep convicted drunk drivers off the road, where sadly we’ve seen them take innocent lives.”

Leandra’s Law is named after 11-year-old Leandra Rosado, who was killed when an SUV she and seven other children were riding in crashed on the Henry Hudson Parkway in Manhattan in October 2009.

The statute, which was signed into law in 2009, created a series of new crimes involving drunk driving while a child is in the car. It also established a requirement that all convicted drunk drivers, regardless of whether there was a child in the car or not, install an interlock device, which is a breathalyzer connected to a car’s ignition. If a driver blows and is found to be intoxicated, his or her car will not start.

Unfortunately, 72 percent of required drivers statewide don’t get interlock devices, according to the NYS Office of Probation and Correctional Alternatives. Drivers have been averting the interlock devices by transferring ownership of their cars and continuing to drive without them. Drivers were also just driving for the originally required six-month period without an interlock and playing the odds that they won’t get caught. This has been demonstrated in Nassau County from DA Rice’s interlock stings with Nassau Probation that have resulted in arrests for people who actually drive to their probation appointments without interlocks.

State Senator Fuschillo, who sponsored both Leandra’s Law and its Nov. 1 update, and is Chairman of the Senate Transportation Committee, said: “Drunk drivers put innocent lives at risk every time they go on the roads. Ignition interlocks are a proactive way to keep convicted drunk drivers from operating a vehicle while intoxicated again. Strengthening Leandra’s Law to ensure more drunk drivers use ignition interlocks will save lives, prevent tragedies, and make our roads safer for everyone.”

State Assemblyman Weisenberg, who also sponsored both Leandra’s Law and its update, said: “Drunk drivers can no longer avoid using an ignition interlock device as ordered by the court. I am deeply appreciative of the efforts of our local chapter of MADD, Lenny Rosado, and the Nassau County District Attorney and her staff for helping to keep dangerous drivers off the road and, in doing so, potentially saving thousands of lives.”

Mr. Mallow said: “MADD thanks New York lawmakers for their work to close loopholes New York’s drunk driving law. With these improvements to Leandra’s Law, we are another step closer to protecting our children and stopping drunk driving in New York.”

Ms. Lee said: “The public believes that all convicted DWI offenders must have an interlock device installed in their car, but the truth is that the vast majority of convicted drunken drivers avoid the interlock installation. DEDICATEDD's tolerance for drunken drivers is zero. Interlocks stop those who do not care from driving drunk; the time is now to stop as them.”