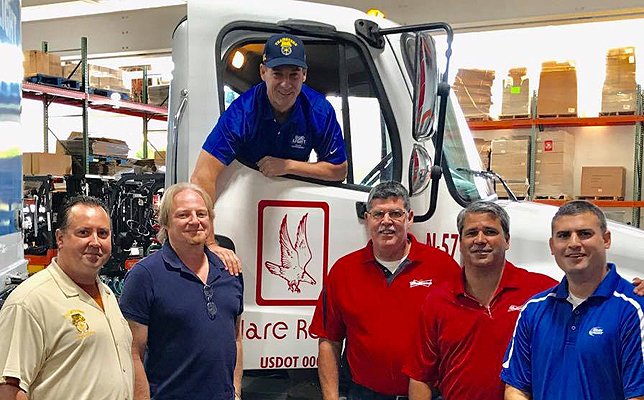 Congressman Suozzi with members of Teamsters Local 812 in Melville.

Huntington, NY - October 3, 2017 - On Friday, Congressman Tom Suozzi (D – Long Island, Queens) continued his “Tom and the Trades” jobs tour by visiting Clare Rose, a local beer distributor in Melville. Suozzi made deliveries with members of the Teamsters Local 812.
This is all part of Suozzi's effort to promote good jobs at good wages to help rebuild our nation’s struggling middle class.
“I’m doing these jobs to highlight the need to create five million $80,000 per year jobs in the United States by 2020. We hit several stops in and around Huntington and I have a new appreciation for the tough, physical work these folks do each day. These are good jobs at good wages and a pathway to the American Dream, so let’s work together as Republicans and Democrats to create more of these good-paying jobs,” said Congressman Suozzi.
This initiative by Congressman Suozzi began in August when he visited a supermarket in Bethpage where he cut meat with butchers. It continued a few weeks later at Covanta in Huntington, where Suozzi operated a crane and rebuilt a pump with members of Operating Engineers Local 30.