The program will consist of classics such as Gershwin’s jazz-inspired Three Preludes as well as modern day compositions like John Leszczynski’s Variations in the Reeds. 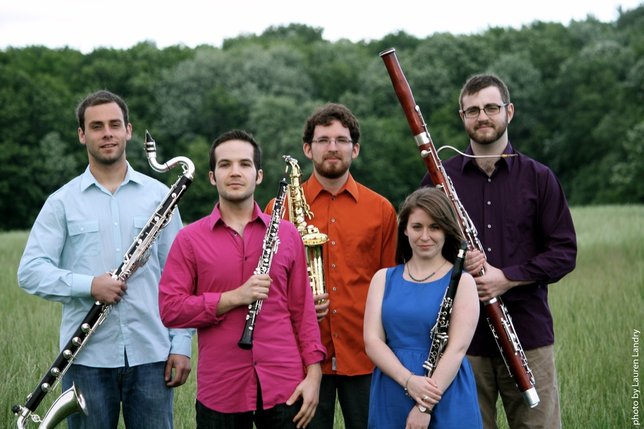 Since being established in 2009 at the University of Michigan, Akropolis has captivated audiences throughout the United States, with their ability to play modern compositions as well as their unique and refreshing arrangements of classical music from the last four centuries. They have been recognized for their talent and innovation with a gold medal from the Fischoff Competition, the 2015 Fischoff Educator Award and five national chamber music prizes including grand prize at the Plowman and MTNA competitions.  Fanfare Magazine has accurately described Akropolis as “playing with imagination, infallible musicality, and huge vitality”.

Akropolis’ inevitable passion is seen not only in their performances, but also in their presence in the music community. They have successfully commissioned 25 new works with composers from the United States, Canada, France, the Netherlands, Turkey, Israel, Argentina and Serbia. In addition to their musical endeavors, Akropolis also created a Fall Education Tour in 2013, and visited ten schools in Michigan devoting time to underprivileged youth or under-funded arts programs. They have continued influencing “the next generation of music mavericks” through the Fischoff Educator’s Tour.  The tour provided them with the experience of working with local school reading programs to create a musical take on the children’s book The Best Story by Eileen Spinelli.

Adelphi University Performing Arts Center (AUPAC) is one of Long Island’s premier cultural arts venues for entertainment of all kinds. Tickets are currently on sale and are priced at $30/$25, with discounts available to seniors, students and alumni. For more information about all events at AUPAC and to purchase tickets, visit here. Information is available at The Lucia and Steven N. Fischer Box Office at (516) 877-4000 or boxoffice@adelphi.edu. Regular box office hours are Tuesday through Friday from 1-6 p.m. The box office is also open two hours before most scheduled performances.