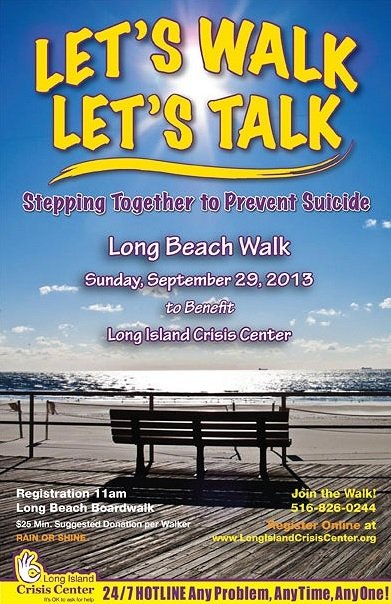 The Crisis Center, now in its 42nd year, is dedicated to increasing suicide awareness, educating everyone about the warning signs of suicide, and de-stigmatizing the subject of suicide and spreading the word that “it’s okay to ask for help.”

“Just this past May, the New York Times reported that suicide rates have risen sharply in the United States,” states Linda Leonard, Executive Director of the Crisis Center.  "This underscores the importance of the Crisis Center’s 24/7 hotlines for anyone to be able to access help at critical times in their lives. And, our September 29th Walk is an opportunity for anyone who has been touched by suicide, either directly or indirectly, to talk openly about a subject that has, for too long, remained in the shadows.”

Suicide and suicide prevention affects everyone:

8 out of 10 people who commit suicide tell someone first

On-site registration for the Walk begins at 11:00 a.m.  Online registration is taking place right now,  or call 516-826-0244 for more information.  A minimum donation of $25 per person is suggested.