Drew, a seventh-grader at Roslyn Middle School, is highly-ranked in the National Boys 12 and Under Division. 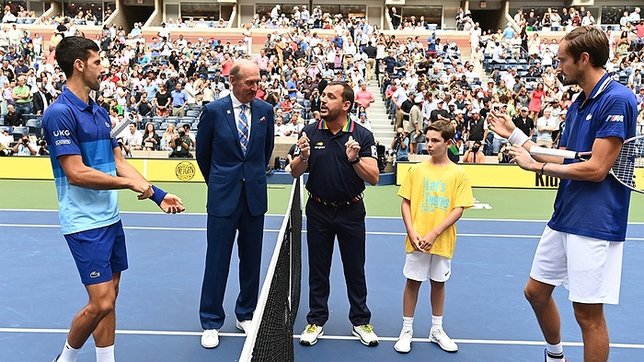 Drew Hassenbein, a 12 year-old tennis player from East Hills, New York, was bestowed the honor of conducting the coin toss at the Men’s US Open Final between Novak Djokovic and Daniil Medvedev this past Sunday at the Arthur Ashe Stadium in Queens.
The coin toss, a vitally important part of any championship tennis match, allows the winner to decide whether they want to serve, receive, or defer. The right choice can give the winner a distinct advantage in the early going of the match-up, and with that much riding on things, Drew handled his coin-tossing duties like a true professional despite being on TV in front of a crowd of thousands.
“It was a really great experience,” he said. “Before the players came out I was talking to former Grand Slam champion Stan Smith for about a half hour, and then the players came out and they said hi to me gave me high-fives. I was a little nervous doing the coin toss because I didn't want to mess that up, but otherwise I was fine.”
Drew, a seventh-grader at Roslyn Middle School, is no stranger to the tennis court himself; playing since he was 5 years old after he was introduced to the sport by his father, Drew has been ranked as high as number one within the past year in the National Boys 12 and Under Division.
His achievements, ranking, and dedication to the sport enabled him to stand out among his peers, and when the United States Tennis Association (USTA) was looking for local youths to participate in several important positions during the US Open – including officiating coin tosses and presenting championship trophies – Drew was nominated and quickly accepted by the USTA to take part.
“This really made me want to work even harder at tennis and maybe I could do this again when I get older,” he said. “I'd love to be there in that situation again, in the finals of a major tournament like the US Open.”
When not playing tennis, Drew also maintains a healthy interest in a variety of other sports, including basketball and flag football; however, tennis remains his main interest, and one that he plans to continue to pursue in the future.
“I really want to play tennis in college and go on tour and win a couple of matches there,” he said.
Drew’s father, Mitch, said that watching his son on the court of the esteemed Arthur Ashe Stadium while standing shoulder-to-shoulder with great tennis champions of the past and present filled his heart with pride, and gave him thoughts of his child’s own potentially bright future in the sport.
“It was really surreal seeing Drew on Center Court at the Arthur Ashe Stadium during the Men's Final featuring two great champions like Novak Djokovic and Daniil Medvedev,” he said. “It was really amazing, and I really thought that Drew handled it quite professionally, like he'd been there before. And who knows? He's really talented and maybe one day they'll be playing on that court himself.”