Lupinacci celebrated Millie Perry’s 100th birthday with family and friends at her home. 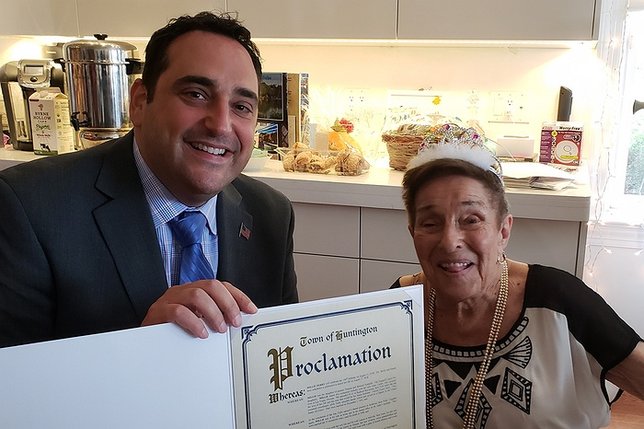 (L to R): Supervisor Chad A. Lupinacci presents a proclamation to Millie Perry for her 100th birthday.

Melville, NY - Sept. 13, 2018 - Huntington Town Supervisor Chad A. Lupinacci celebrated Millie Perry’s 100th birthday with family and friends at her home in The Greens on August 31.
"Congratulations and best wishes to you, Millie – and your twin sister Louise – as you both celebrate this incredible milestone," said Supervisor Lupinacci as he presented Millie Perry a Town of Huntington proclamation from the Town Board recognizing her 100th birthday, after which Millie divulged her secret to a long and vibrant life: a glass of Scotch whiskey at 4:00 PM every day.
Millie Perry was born August 31, 1918, to Theresa and Michael Scarpelli. She has four sisters, including her twin, Louise, who was celebrating her 100th birthday in Las Vegas. Millie attended PS 45 in Bedford Stuyvesant where she met her husband Gabriel “Gabe” Perry. They remained sweet hearts while Gabe attended dental school and served as a Captain in the U.S. Air Force. They were married on December 7, 1941. After World War II, Gabe opened a dental practice in Bellerose, New York, where Millie assisted as his right-hand. Millie and Gabe were married for 55 years until his death in 1996. Millie has 2 children, 7 grandchildren and 15 great-grandchildren. Today, Millie lives with her son Joe and his wife Lenore in Melville, New York.