After a four-month long operation, police have apprehended the owner of a pot farm of over 100 plants hidden in a water recharge basin in Commack. 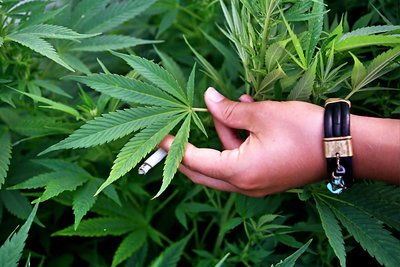 After a four-month long sting operation called “Operation Green Thumb,” the man believed to have cultivated a massive marijuana farm in Commack has been arrested.

Over 100 plants, which were 7 to 10 feet in height, were seized from a water recharge basin in Commack at Motor Parkway and Red Leaf Lane.

Camouflaged surveillance cameras were hidden in the farm to track movement, and police found at least two subjects tending to the plants at night during the four month operation.

"It was well attended, terraced and notched out in the area that looked like a  field you would see in Southeast Asia," said Public Safety Deputy Chief Kevin McPadden to Commack Patch.

According to Patch, Public Safety officers waited until the plants matured, and then wore camouflage gear to stake out the water recharge basin on Wednesday night.  It was then that they encountered Kern entering the basin to tend to the plants with another individual.  Kern was apprehended, but the other suspect fled on foot.

All marijuana plants were removed from the area Thursday morning, but McPadden says that Operation Green Thumb is ongoing, and more arrests are expected to be made.

The weight and street value of the plants has yet to be calculated.