Legislator Lafazan and an array of speakers called attention to an alarming recent increase in anti-Semitic violence and incidents around the world. 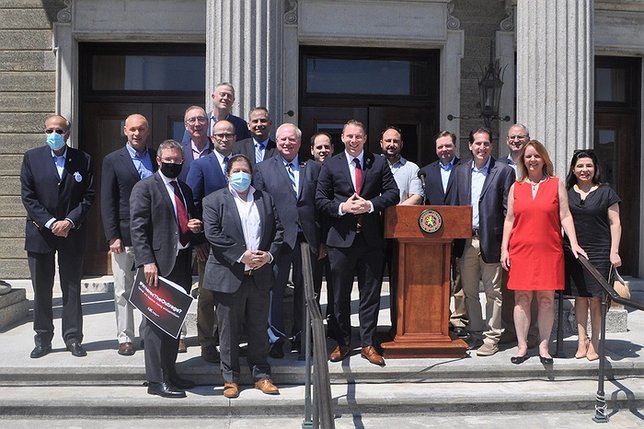 Legislator Lafazan joins with his colleagues in government and supporters of “Stop Anti-Semitism and Hate Now.”

In response to the alarming increase in attacks against the Jewish community and the acts of hate seen across America, Nassau County Legislator Joshua Lafazan, the Woodbury Jewish Center, and community organizers joined forces to condemn these acts on the front steps of the Theodore Roosevelt Executive & Legislative Building during the “Stop Anti-Semitism and Hate Now” rally on the front steps.
During the event, Legislator Lafazan and an array of speakers called attention to an alarming recent increase in anti-Semitic violence and incidents around the world. This includes reports by the ADL which indicate a 63-percent rise in anti-Semitic attacks last month nationwide and 2019 statistics from the FBI Hate Crimes reported that shows how anti-Jewish bias accounted for 60.2 percent of anti-religious hate crimes.
“My grandfather Boris was a refugee of the Holocaust. Through his eyes, I learned the consequences of what happens when hate directed towards a group of people goes unchecked - and that's why today isn't just about people of Jewish faith standing up and fighting back,” Legislator Lafazan said. “It's also about all of our allies, and people of good conscience everywhere, understanding the gravity of just how serious things are right now, and realizing they too have a crucial role to play to extinguish Anti-Semitism and hate in all of its pernicious manifestations. Because we understand all too well the weight of these famous words: ‘All that is required for evil to triumph is for good men to do nothing.'"
At the rally, Legislator Lafazan was joined by his Legislature colleagues Arnold W. Drucker, C. William Gaylor III, Thomas McKevitt and Debra Mulé; New York State Senators Todd Kaminsky; Jim Gaughran and Anna Kaplan: New York State Assembly Members Edward Ra and Steve Stern; members of the Nassau County Commission on Human Rights and the Jewish Community Relations Council of Long Island; Long Island Board of Rabbis; American Jewish Committee Long Island; The Simon Wiesenthal Center; Holocaust Memorial and Tolerance Center; Temple Beth Torah of Westbury; Makom NY; StandWithUs;  the Interfaith Clergy Council Syosset-Woodbury; Hineni Heritage Center; Sid Jacobson JCC; Midway Jewish Center; Voices for Truth and Humanity; The Long Island Coalition Against Bullying; Congregation Simchat HaLev; Mid-Island Y JCC; Suffolk Y JCC; Gotham Government Relations, Raphaelson & Levine Law Firm; Alpha Epsilon Pi Fraternity; Plainview Jewish Center; Democratic Majority for Israel; Temple Or Elohim - A Community Reform Congregation; and Israel Nitzan, Acting Consul General, Consulate General of Israel in New York.