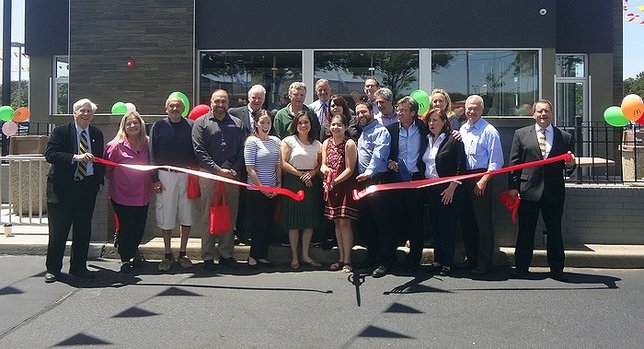 Patchogue, NY - June 15, 2018 - The Patchogue McDonald’s restaurant (www.macpride.net) located at 499-85 Sunrise Highway recently held its Grand Re-Opening ribbon-cutting celebration, with the world-famous fast food franchise celebrating a new beginning after an extensive period of renovation that saw the establishment receive a cutting-edge, 21st century coat of paint.
To say that McDonald's runs in the blood of franchise owner Josh Kaufman’s family would be an understatement; the Huntington resident and his father Jonah currently own 16 locations on Long Island, ranging from Baldwin to Farmingville. But Kaufman noted that the beginnings of his family’s association with the McDonald’s brand originally began many decades ago.
“My grandfather bought our first McDonald's restaurant in 1960 - located in East Northport - and it's been in the family for 58 years,” he said. “From there, we've been able to acquire restaurants east and west of there.” 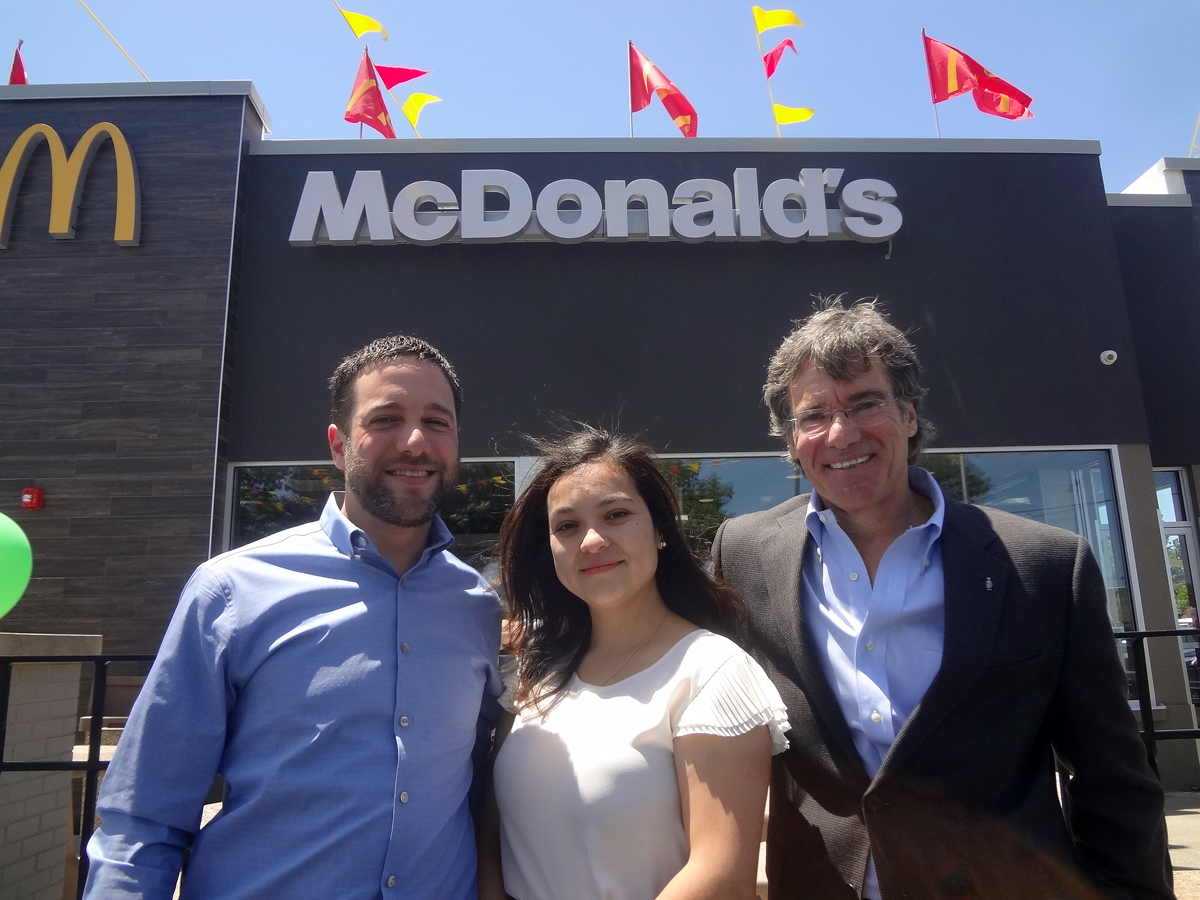 (L to R): Josh Kaufman with his wife Maria and father Jonah. Photo Credit: Chris Boyle
Kaufman said that his close relationship with the McDonald's brand – and especially its many employees – has been a source of great pride for him over the years; pride that has only been magnified now that he’s actively involved in the business himself.
“It's something is very special…not only have the restaurants been in our family for decades, but the people that have been working in the restaurants as well. They’ve been with our family for 30, 40, years, and we even have a few employees that have been with us for 50,” he said. “So a lot of the managers working now I knew when I was a kid, and it's great to be able to work with so many long-term employees as well as meet new people who are starting to gain experience with the company...it's really the most special part.”
The Patchogue McDonald's location was originally built by the Kauffman family in 1994, and at that time the franchise’s construction plans favored small designs in an effort to open restaurants at a faster pace to assist with expansion efforts. However, with today’s wider and more complex menu options, Kaufman said that more kitchen space was needed to accommodate them; and addition, the restaurant itself needed a new coat of paint in order to serve its 21st century clientele all the better. 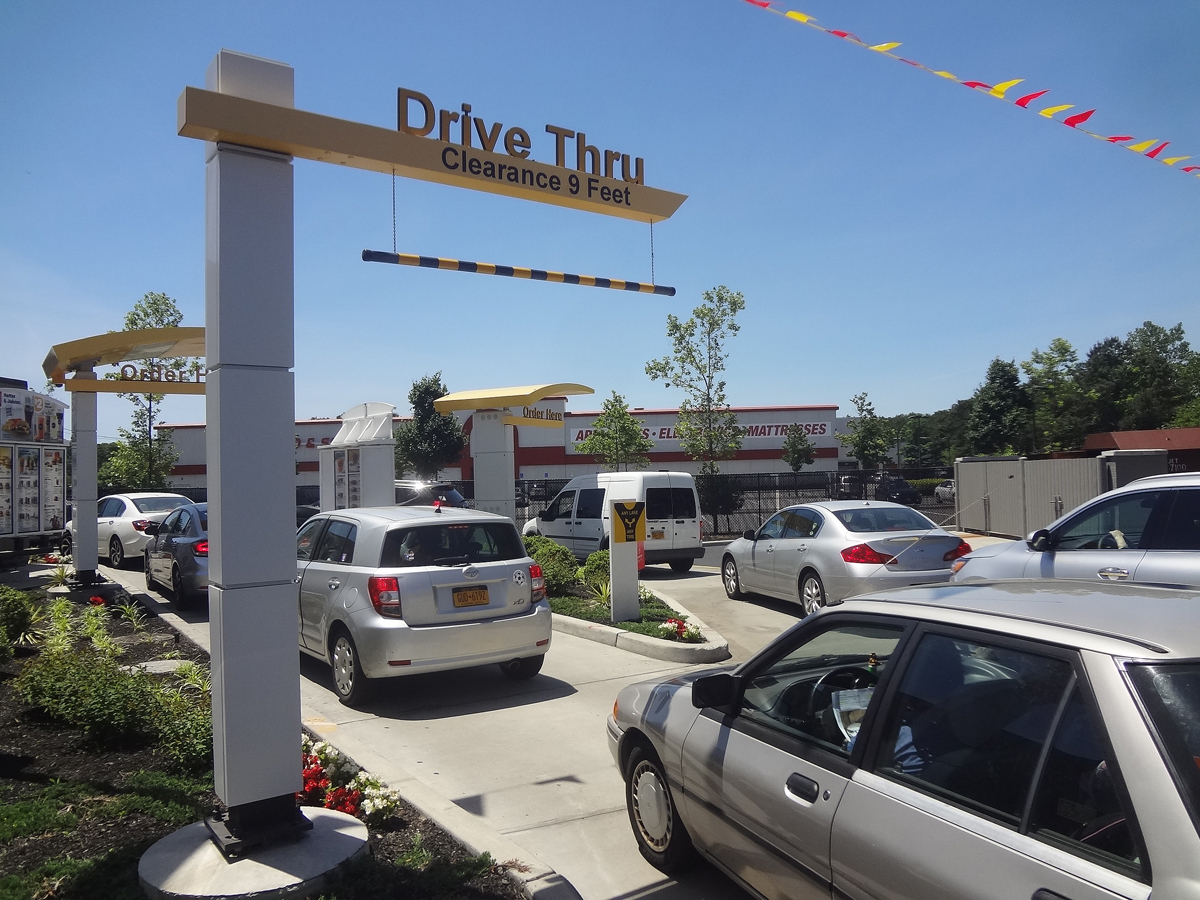 One of the new additions to the restaurant was a side-by-side drive-thru. Photo Credit: Chris Boyle
“We added a side-by-side drive-thru to the outside, and on the inside we expanded the grill area for more room...this was basically one of our major projects. Essentially, all four walls stayed intact, but everything else inside was almost completely gutted and the outside was all torn up and reconfigured,” he said. “The biggest challenge was the permitting, but once that was acquired the drive-through probably took about 4 months and the dining room probably took around 2 months. We didn't do it all at once due to the process of getting the correct permits, so we staggered construction and stayed open during it whenever we were able to... and the customers really tried to work with us through the construction, which we appreciate.”
Construction was finally completed approximately May 30th of this year; from there, Kaufman waited about two weeks to make sure everything was running smoothly before holding his Grand Re-Opening extravaganza, which was attended by local politicians and members of the Chamber of Commerce. 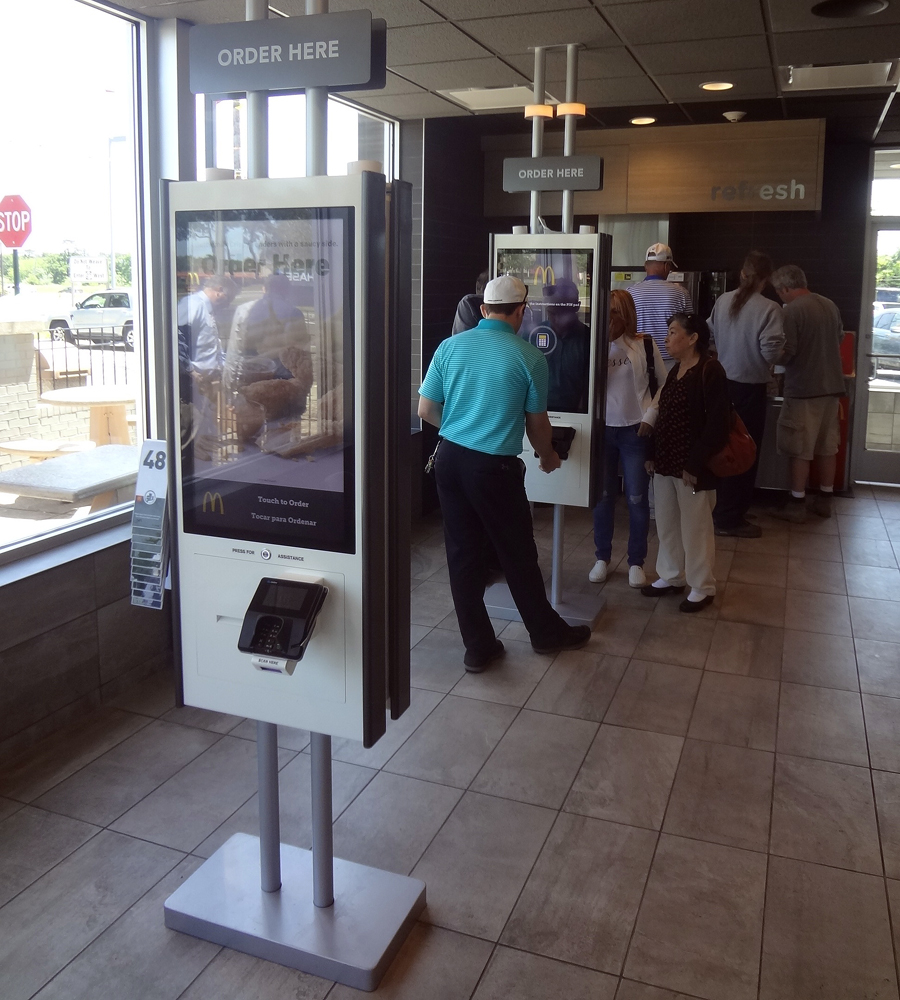 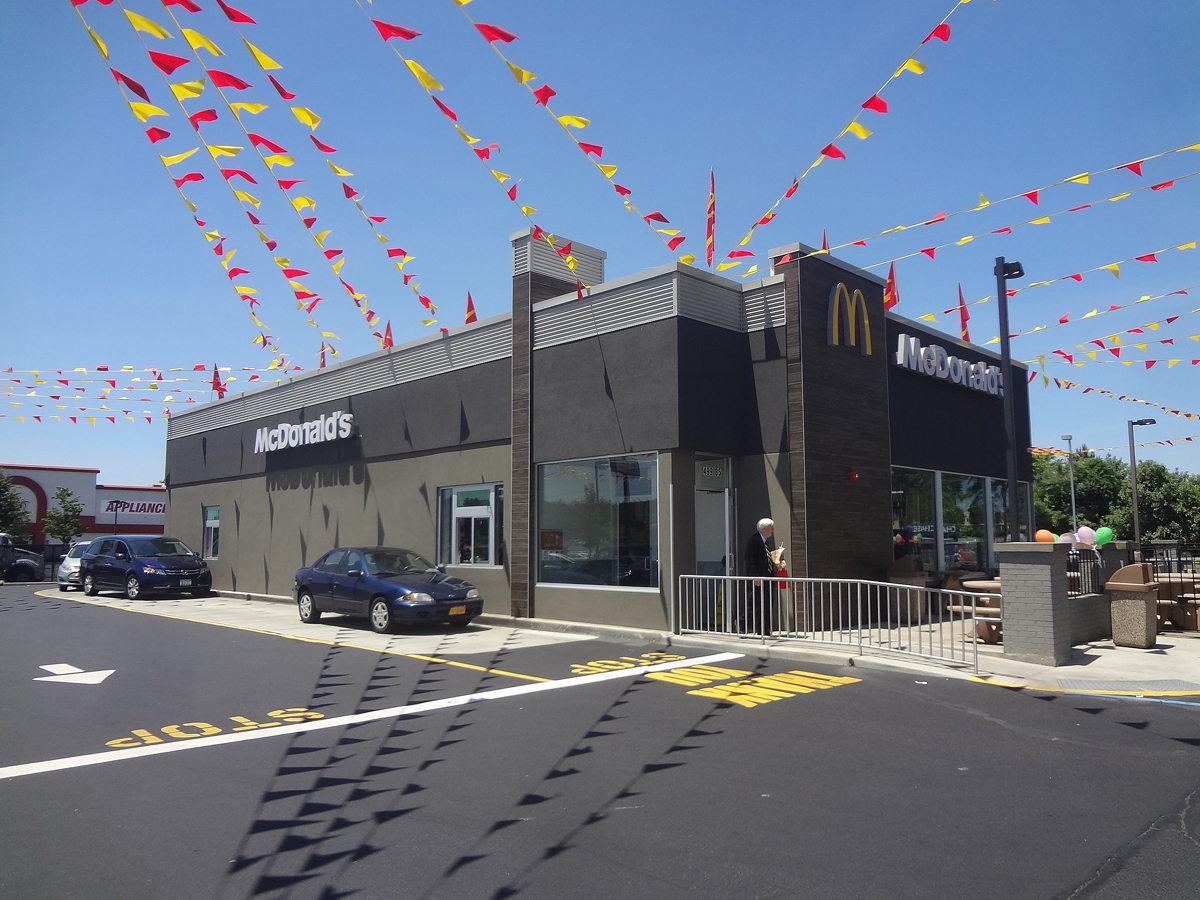 The newly-renovated Patchogue McDonald’s restaurant located at 499-85 Sunrise Highway. Photo Credit: Chris Boyle
“And then once you've ordered, you can sit down and we'll bring the food directly to you, which is a new initiative that goes along with the kiosks,” Kaufman added. “It shows that McDonald's is trying to become fresh, relevant. But of course, you still have the option to order at the front counter...plus if you're paying with cash, you would have to, because at the moment the kiosks only accept card and Mobile Pay options.”
In addition, another way that McDonald's is using technology to enhance the customer experience is through the use of a new mobile app, which allows customers to place orders and pay from their iPhone device. And if they don't feel like getting out of their vehicle, customers even have the option of imputing what space they are occupying in the parking lot so a crew member can actually walk their order out to them while they sit in the comfort of their car.
“That's another initiative that goes along with enhancing the brand,” Kaufman said. 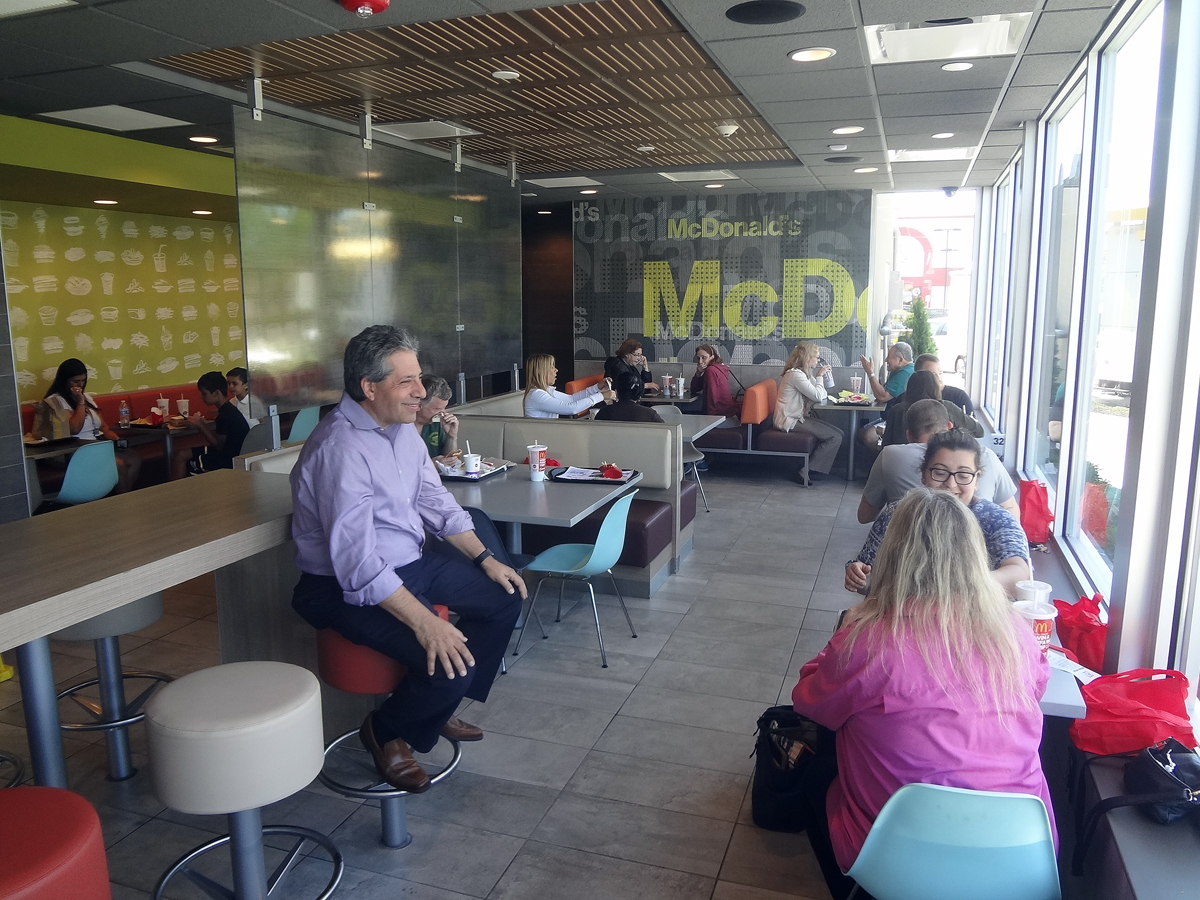 Customers enjoying their meals - and the new decor - at the grand re-opening. Photo Credit: Chris Boyle
The Patchogue location isn't the only one undergoing renovation; three months ago Kaufman's Farmingville location underwent the process, and coming up will be work on their Uniondale location, as well as eight more locations in 2019.
As for the next generation of his family and their special connection to the McDonald’s franchise, Kaufman noted that he has already told his 14 year-old daughter that once school starts he's going to begin training her on the French Fry machine, which he sees as the starting point of grooming her to take over the business from her father one day.
“She will be a 4th generation McDonald's employee. My goal, and the goal of a lot of franchisees, is to pass along the business to their children, which is one of the things about McDonald's that most people are unaware of,” he said. “They're mostly owned and operated by families who pass the business down to the next generation, so my situation is actually very common, and it's one of the things that are special about this brand...we don't just look at this as a business opportunity to make money, these restaurants have been part of our family for generations.”
To find out more, please visit www.macpride.net.