Members of the Long Island Living History Association will also present uniforms, tactics, and weapons of that era. 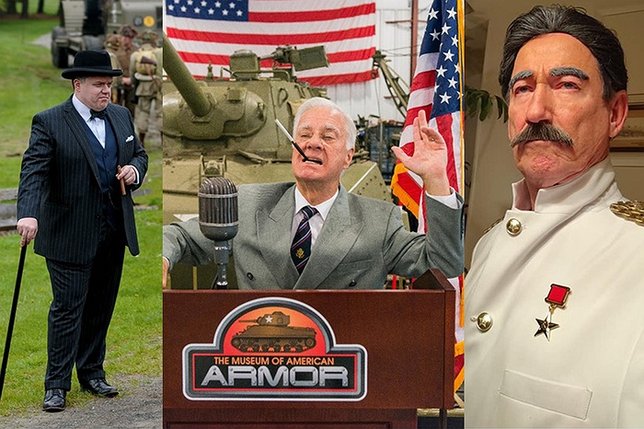 “The Big Three” of World War II will make an appearance at this year’s World War II Encampment Weekend, June 19th and 20th,  at the Museum of American Armor inside Old Bethpage Village Restoration, 1303 Round Swamp Road, Old Bethpage, Long Island.
Beside an operational array of Allied and enemy armor, interpreters who portray President Franklin Delano Roosevelt, Britain’s Winston Churchill, and Soviet Russia’s Stalin will greet visitors and remind them of the extraordinary alliance that confronted and defeated Nazi Germany.
Members of the Long Island Living History Association will also present uniforms, tactics, and weapons of that era.
Armor Museum president and founder Lawrence Kadish, observed, "Our continuing mission at the Armor Museum is to bring history to life so that a new generation of Americans understand that the precious gift of freedom was bought and paid for by the sacrifice of those who came before us.”
Armor Museum trustee, former U.S. Congressman Peter King, stated, “Living history has become an essential part of keeping our nation’s heritage alive and relevant at a time when online platforms have created a virtual alternative universe for too many of our young people. To see these vehicles operate in the field opens a journey of study and education for many of our visitors.”
The Armor Museum's Senior Trustee, Michael Sapraicone, noted, "World War II Weekend is designed to remind Long Islanders that they have heroes in their families. That medal in the back of the dresser? It was for your grandfather's valor. That fading honorable discharge certificate? It was won on a far off battlefield. And the freedoms we enjoy? That's the legacy they have left all of us."
Families will be admitted only with pre-reservation e-tickets purchased on a first come – first served basis. Admission fees will be posted and available by going on line at https://www.oldbethpagevillagerestoration.org/tickets.
Families can bring lawn chairs to designated areas, masked, and separated from other visitors as directed by park safety personnel.
The Armor Museum enjoys the support of Squad Security, Polimeni International, Bristal Assisted Living, PSEG Long Island, Bethpage Federal Credit Union, BDG, ltd. Amtrust Title, RIPCO Real Estate, among others.