Award-winning filmmakers, D A Pennebaker and Chris Hegedus will be Tom Needham’s special guests this Thursday at 6 P.M. on WUSB’s The Sounds of Film. 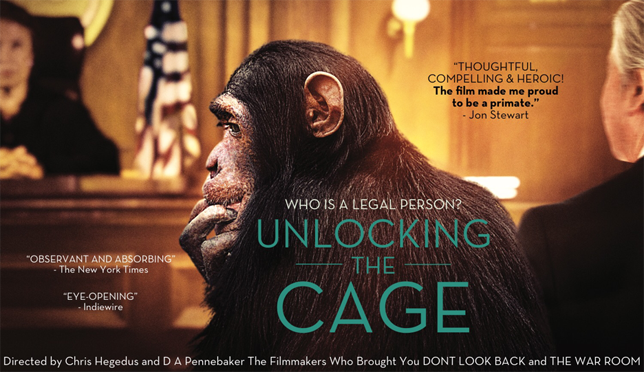 Stony Brook, NY – June 1, 2017 – Legendary filmmakers, Chris Hegedus and D A Pennebaker will be Tom Needham’s guests this Thursday on WUSB's The Sounds of Film.  They will be discussing their film, Unlocking the Cage, which follows animal-rights lawyer Steven M. Wise as he tries to convince the legal system to recognize chimpanzees as legal persons.
Unlocking the Cage features Wise arguing that cognitively complex animals like chimpanzees and dolphins deserve to be treated as self-aware and autonomous beings. Through the film, Wise and his team make history by fighting to transform a chimpanzee from a “thing” with no rights to a “person” with legal protections. Ground zero for this controversial international story was Stony Brook University, who was targeted by Wise for its use of chimpanzees in laboratory testing. Unlocking the Cage is currently available on First Run Features DVDs.
Chris Hegedus and D A Pennebaker are two of the world’s most acclaimed documentary filmmakers. They are renowned for their unobtrusive, cinema-verite style of filmmaking where they follow their subjects using handheld cameras. They are known for documenting a wide variety of topics including music and politics. Some of their best-known films include The War Room, Monterey Pop, Don’t Look Back, Ziggy Stardust And The Spiders From Mars, Startup.com and Kings of Pastry. In 2013, the Academy of Motion Picture Arts and Sciences recognized D A Pennebaker’s body of work with an Oscar for Lifetime Achievement.
About the Sounds of Film
The Sounds of Film is the nation’s longest-running film-themed radio show. For the past 30 years, the program has delivered a popular mix of interviews and music to listeners all over Long Island, parts of Connecticut and streaming live at wusb.fm. Previous guests include Alexandra Pelosi, Barbara Kopple, Conspiracy’s Kip Andersen, Jimmy Webb, Lalo Schfrin, Jim Breuer, Maria Schrader, Darryl "D.M.C." McDaniels, and John Tartaglia.