It’s Bee Swarm Season, More than 16,000 Bees Were Removed from a City Tree

In a swarm, bees are not looking to attack unless you disturb them. On the streets of New York City, more than 16,000 of them were removed on Monday. 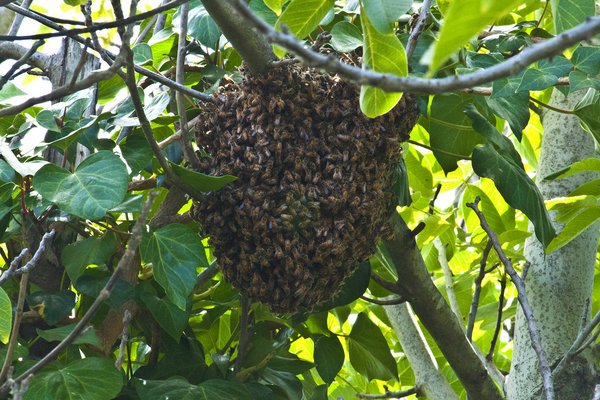 Hear that buzzing? It might be a swarm of bees at work forming a new colony. Bee swarm season in New York typically takes place in late spring and into early summer.

For those who were out enjoying the holiday weekend weather in the upper west side in Manhattan – near 72nd Street and Amsterdam Avenue, they had a chance to view a swarm of 16,000+ bees at work on a tree. By Monday, the NYPD safely removed it.

The swarm of bees was first noticed by Andrew Cote, a member of the NYC Beekeepers Association. The bees were gathered under a tree located along a street where pedestrians walk.

After it was reported into the NYPD, the bees were safely removed by Detective and resident beekeeper Anthony Planakis. The bees were vacuumed and boxed up for transportation to a hive atop the roof of the Waldorf Astoria hotel.

In a swarm, bees are not looking to attack anyone, unless they are disturbed.

The process of swarming begins when the queen bee leaves the colony with a large group of worker bees (more than 50 percent of the hive) to find a new location to form a colony. It’s a natural phenomenon.

While this latest incident occurred on the streets of Manhattan, Long Island is actually a place bees thrive well in. With manicured gardens, swimming pools and the moderate climate, it’s a desirable place for the little buzzy bees.