Westbury High School principal David Zimbler manned the register for McPrincipal Night, which served as a fundraiser for the school. 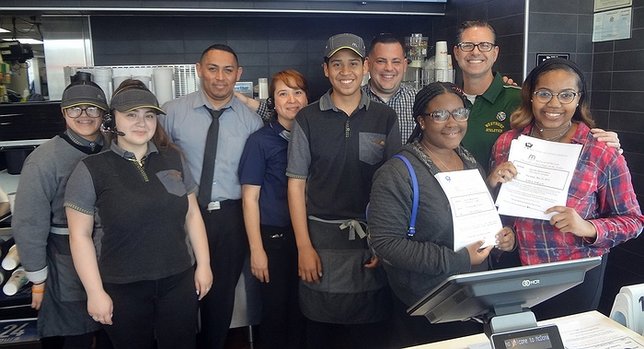 It’s not every day that teenagers get to turn the tables on their teachers and order them around, but that’s just what Westbury High School students recently got the opportunity to do to none other than their own principal…but all for a good cause, of course.
Westbury High School principal David Zimbler, for the second year in a row, tied on an apron and manned the register at the Jericho McDonald’s restaurant located at 105 Jericho Turnpike on May 16, with the event – appropriately dubbed McPrincipal Night – serving as a fundraiser for the school. 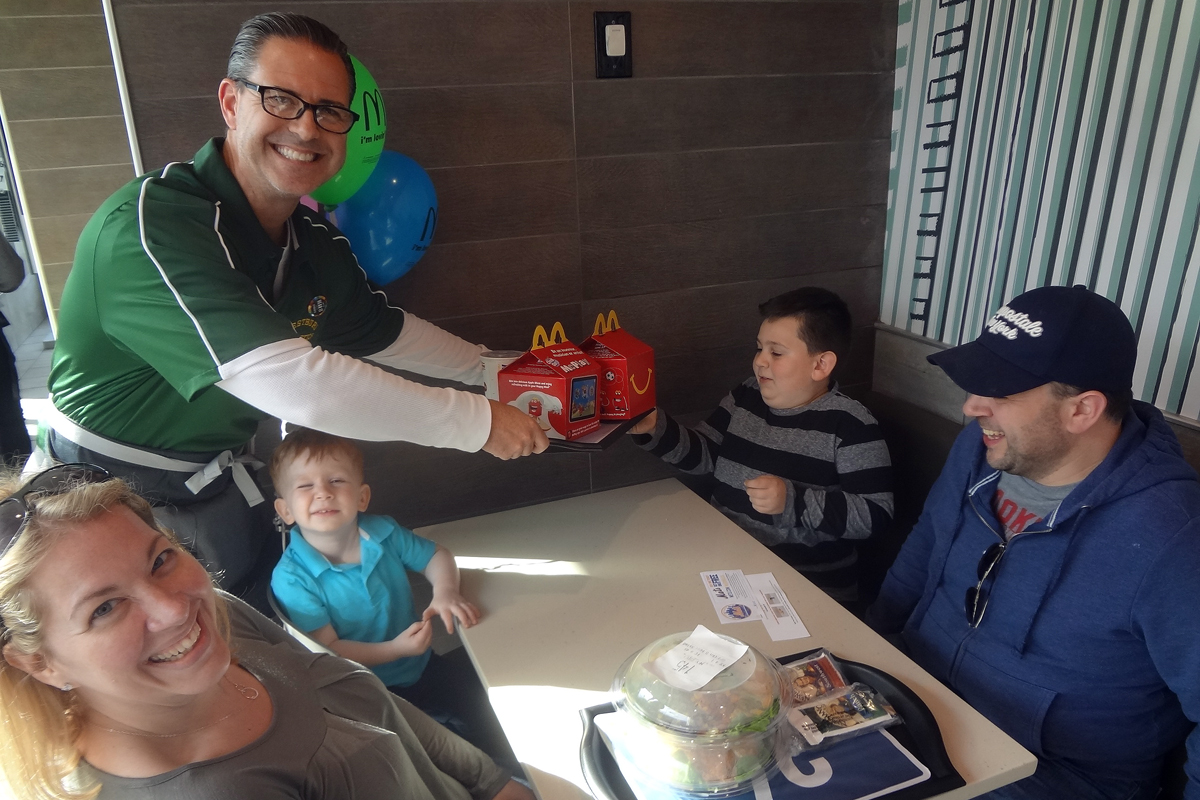 Principal David Zimbler delivering a tray. Photo Credit: Chris Boyle
Principal Zimbler worked an entire shift, taking orders and delivering trays to tables of his students while under the watchful eye of Jericho McDonald’s owner-operator Steven Frazier; however, he noted that such hard work – in addition to the unusual role reversal – was more than worth the anticipated positive outcome.
“This is the second year we've been doing this. Mr. Frazier has truly been a community advocate and a school advocate for the entire district. Last year we decided to try McPrincipal Night, and I offered my services to Mr. Frazier, and he was more than happy to accept,” Zimbler said. “I have to say, this isn't as easy as I thought it would be. I had to learn how to use the register, but all it takes is some time and effort. But the main thing is customer service...it's all about customer service, and that was the first thing Mr. Frazier taught me.” 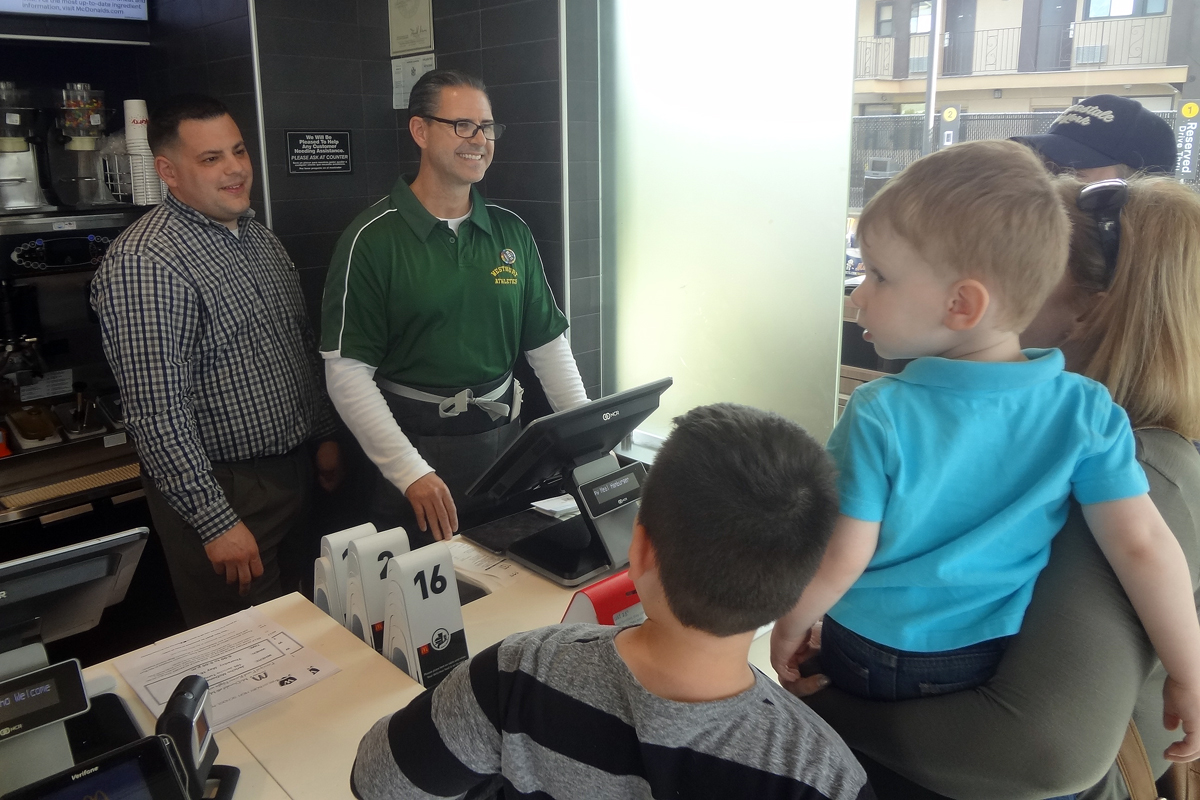 (L to R): Steven Frazier and Principal David Zimbler. Photo Credit: Chris Boyle
Following in his father's footsteps – Lloyd Frazier was a McDonald’s franchisee for many years – Steven Frazier became the owner-operator of the Jericho McDonald's in 2008, and has been striving to give back to his community ever since.
“I find great fulfillment in giving back to the community and I'm very involved in the Westbury school district. I donate to the annual football team pancake breakfast and we previously held a McPrincipal Night with David Zimbler back in 2018 which generated funds for the newly-established engineering club,” he said. “Based on the success of that event, and the fact that I have a good relationship with the high school, I was asked if we can have another McPrincipal Night where the money would go towards creating a scholarship for a Westbury High School student. Of course, I immediately said yes.” 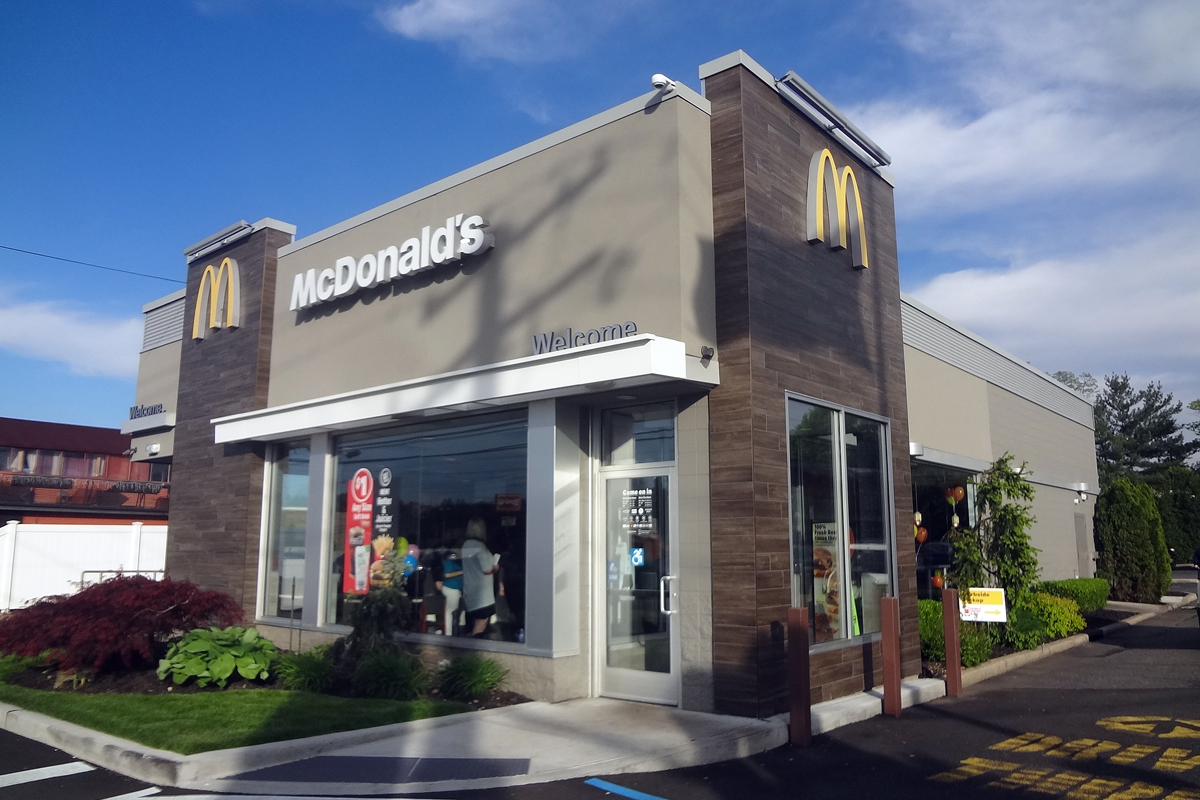 The Jericho McDonald's restaurant. Photo Credit: Chris Boyle
Frazier's generosity seemingly knows no bounds; when last year's McPrincipal Night generated significant funds for the engineering club – but none the less fell short of the overall mark needed – Frazier filled in the gap right out of his very own pocket, to the tune of nearly $2,000.
Frazier has enjoyed a great deal of recognition from his community for his altruistic endeavors, including an award from the Westbury High School Engineering Club at their recent annual Emmy Gala, as well as a citation from the Town of Hempstead for his involvement with helping further the youth in his community with their studies beyond high school. 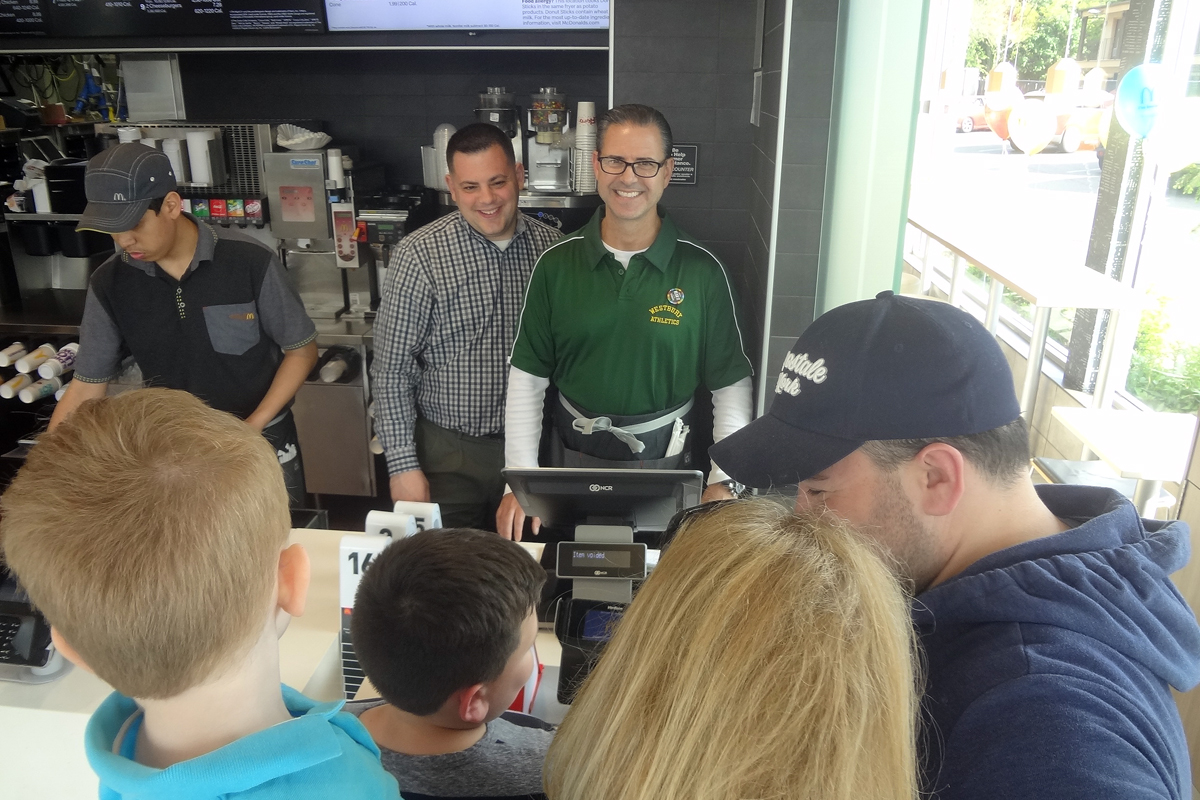 (L to R): Steven Frazier and Principal David Zimbler. Photo Credit: Chris Boyle
This year, the money being raised by McPrincipal Night is going to Time For Action (TFA), a student-based organization that advocates for educational equity within the school. The money will be utilized to create a scholarship for one very deserving graduating senior this year, according to Sydni Chester, senior and former TFA vice-president.
“We have a scholarship fund, and our principal is working so that we can give out the first student-based scholarship that TFA has ever offered,” she said. “It's very good to have principal Zimbler doing this...he has a Master's degree and he's taking the time to work at McDonald's, you know? He's such a great guy, and we hope we get a lot of money for our scholarship tonight.” 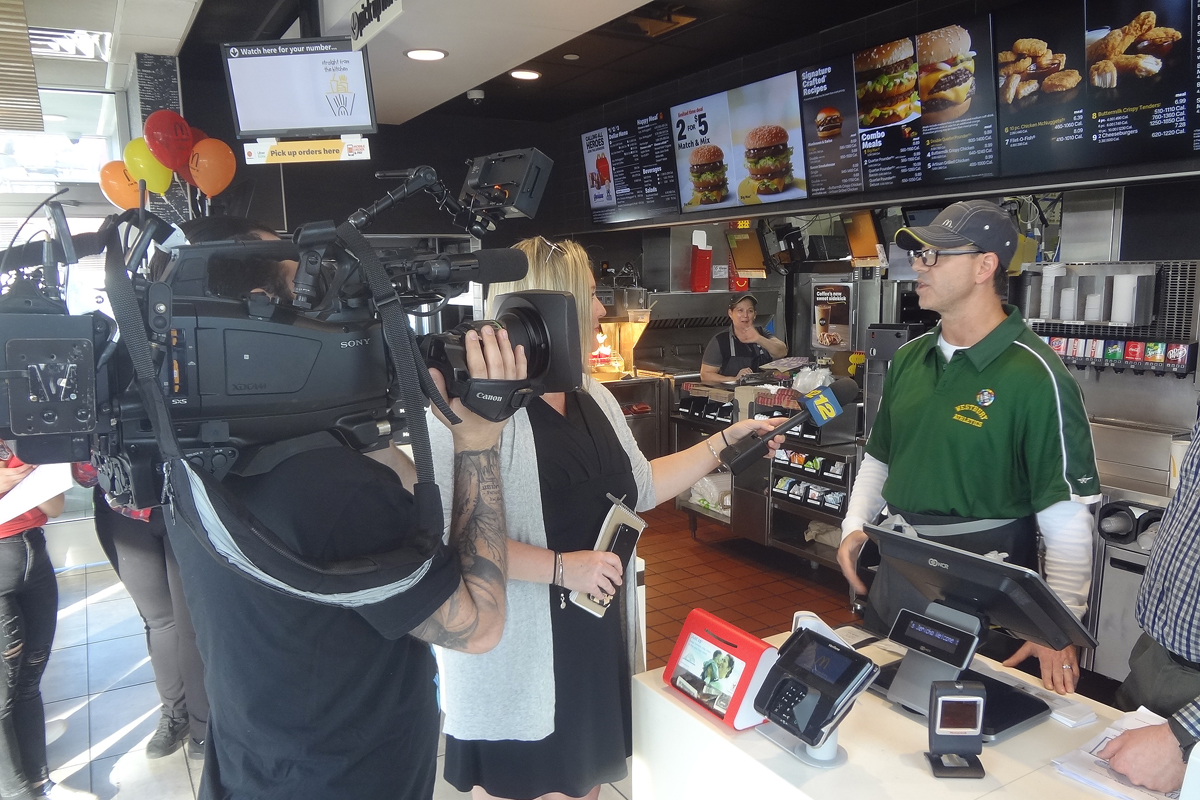 Principal David Zimbler interviewed by News 12 Long Island. Photo Credit: Chris Boyle
The event, which was also covered by a News 12 Long Island cameraman and reporter, was exceptionally busy throughout its entire three hours, with the last hour being especially busy. Zimbler found himself swarmed at the counter by students and staff who wanted to place their orders directly with him, as opposed to using the touchscreen-based self order kiosks nearby; when asked why, many of the students stated that they didn't mind waiting however long it took to be served by their beloved principal.
Zimbler expressed his appreciation for the community and his students, all of which turned out in droves to help support the school's fundraising efforts...and possibly to also enjoy watching their beloved principal sweat it out behind the counter a little bit.
“A lot of students, parents, community members...everyone came in last year to help the cause, and we're hoping they all come out again this year. It's all cause-driven,” he said. “I was happy that my students got a kick out of me serving them, and if Mr. Frazier is willing I'd love to do this every year, with each year dedicated to a different cause. We’ve really established a great partnership, and it's really important to have strong community partners like Mr. Frazier and McDonald's.”
"I am both excited and proud to be working with Steven Frazier again, although now as a consultant," said Luciana Montuoro of LM Consulting Services. "Being a team player, Steven has been involved in serving on different committees and board seats since the inception of his career with McDonald's as an owner and operator. His commitment to wanting to make a difference became even more evident when he elected to represent his Long Island colleagues by sitting on the McDonald's Tri-State Public Relations Committee, as well as on the People Team. Steven has always supported community outreach and grassroots programs. Although he had a good relationship with Westbury HS, I enjoyed cultivating and growing this relationship over a year ago when the first McPrincipal Night took place at his store. The story, surrounding the event was made more real by communicating the message to the community and its students through Facebook and Instagram."
Pictures of the event can be viewed mid-week at Stand Out From the Crowd Marketing via Facebook, according to Montuoro.