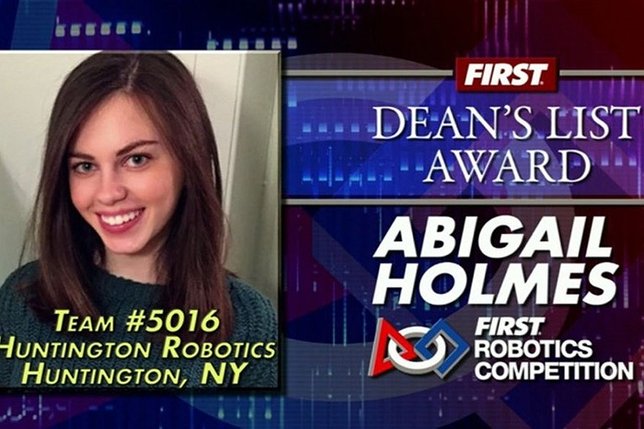 Abigail Holmes, Huntington High School junior, returns home as a Dean’s List recipient at the FIRST Robotics World Championships. She is among ten individuals worldwide to receive this distinguished award.

SInce its introduction in 2010, the award has attracted the attention of prestigious colleges and universities such as M.I.T. and Yale. Last year nine recipients applied to Yale and eight were accepted. Abigail is nothing less than one of the nation’s brightest who shows true leadership, initiative and drive.

FIRST (For Inspiration and Recognition of Science and Technology) was founded in 1989 by Dean Kamen, American engineer, inventor and entrepreneur. The program is in place to inspire young people’s interest in Science, Technology, Engineering and Mathematics (STEM).

Abigail recently attended the FIRST Robotics World Championships in Detroit with her parents.  But it was a bittersweet moment as it was the first time in three years that her whole team didn’t advance together.

“I cannot thank Huntington Robotics and the Huntington community enough for the amazing opportunities they have provided to me,” said Abigail. She noted how important and supportive her teammates and Huntington Robotics faculty adviser Brian Reynolds, who nominated her for the award, have been. “I was just so grateful to be a finalist and cannot stress enough my gratitude,” she said.

She registered as a student ambassador, where she led VIP guests tours and advocated for the FIRST program to current and potential donors. She has experienced first hand the powerful impacts of STEM-related initiatives.

In 7th grade Abigail was diagnosed with the rare genetic disorder Ehlers Danlos Syndrome (EDS). This is a connective tissue disorder that at times had put Abigail in a wheelchair and left her in immense pain. Her medical condition has hospitalized her over 15  times in the past four years.

“In 8th grade Mr. Reynolds pushed me into tech,” said Abigail. “He told me if I ever felt up to it I was welcome to come by, so one day I wheeled into the wood shop and fell in love.” Abigail soon after found her determination and opportunity in the tech community.

Team 5016- Huntington Robotics was founded in 2013.   Currently, the team consists of 40  members, with Abigail as the captain and is the 5,016th  team to register out of 8,000 teams worldwide. “They (Huntington Robotics) have become my second family,” said Abigail.

As a recipient of the Dean’s List Award, Abigail has been awarded with a handful of opportunities as well as continued relationships with the FIRST community. One of the goals of this program is to foster the next generation of scientists and leaders.

“FIRST is more than robots. The robots are a vehicle for students to learn important life skills. Kids often come in not knowing what to expect- of the program nor of themselves. They leave, even after the first season, with a vision, with confidence, and with a sense that they can create their own future,” Dean Kamen said.

Abigail plans to pursue an education in the biomedical engineering field with a minor in Spanish. One of her craziest dreams is an “entrepreneurial goal to start a 501c3 where I can utilize my fluency in Spanish and make medical technology accessible to communities in need.”

For more on this story, visit here.