Paulette Ofrias of Southold was selected as the 2017 NY State Senate’s Woman of Distinction from the First Senate District. 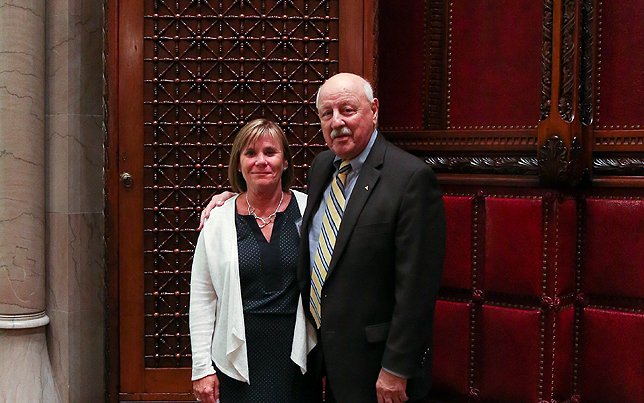 Senator Ken LaValle announced that Paulette Ofrias of Southold was selected as the 2017 NY State Senate’s Woman of Distinction from the First Senate District.

Albany, NY - May 10, 2017 - Senator Ken LaValle announced that Paulette Ofrias of Southold was selected as the 2017 NY State Senate’s Woman of Distinction from the First Senate District. Mrs. Ofrias was officially recognized at a NY State Senate ceremony yesterday in Albany.
Senator Ken LaValle said, “Paulette Ofrias has been a tireless advocate, devoting her time and talents to improve her community.  She is a business leader, educational advocate and volunteer for local civic organizations.  Paulette now joins other notable women of New York State who have been selected for this special recognition.”
Mrs. Ofrias has been a member of the Southold School Board of Education for 14 years, serving as President for the past five. Paulette has been instrumental in fostering a successful relationship between Southold and Greenport School Districts.  Her efforts have led to the sharing of programs, administrators and sports teams, creating greater opportunities for students and savings for taxpayers. Under Paulette’s leadership, the Southold-Greenport concept has overcome geographical and social barriers to become a shared services model for the rest of the state.
Mrs. Ofrias has been active in the School Athletic Association, Building and Grounds Committee, and a member of the Board of Directors of the Southold School Educational Foundation. Paulette has volunteered for St. Patrick's Church CCD religious education and CYO Basketball programs.  She has received the St. Pius award of Rockville Centre, for service and commitment.
A member of the Southold Rotary Club, Paulette has also supported the work of the Chamber of Commerce.  Her efforts on behalf of the Southold Town Annual Fourth of July parade have made it a success for residents and business owners on the North Fork.   Paulette is a Trustee of the East End Health Plan and Serves on the East End Financial Group Advisory Board.  She was honored by the North Fork Chamber of Commerce in 2014 with the Business Award on behalf of the Scott Family Pharmacy.  Now, Paulette can add “Woman of Distinction” to her many recognitions.
Paulette and her husband, Greg, own the Southold and Shelter Island Pharmacies, and have two adult children, Scott, an attorney, and Patrick, a police officer.  Paulette Ofrias’ civic-minded contributions have positively affected her community, and established a legacy for future generations.