On a global scale, production and consumption of plastics have continued to rise over the past 50 years and an estimated 297.5 million tons of plastic were produced in 2015. 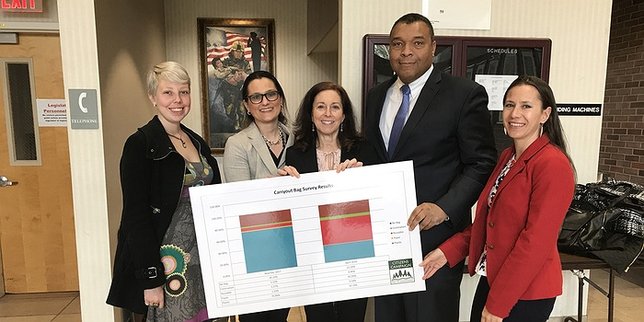 Suffolk County’s Health Committee held a a special presentation in recognition of Earth Day on plastic pollution on Long Island.

Hauppauge, NY - April 20, 2018 - In recognition of Earth Day, a special presentation, regarding the impact plastic pollution has on our environment, was given by Adrienne Esposito, Executive Director of Citizens Campaign for the Environment and Rebecca Grella Ph.D., Research Director and educator at Brentwood High School, at the Suffolk County’s Health Committee today.
“Plastic pollution on Long Island is not simply an environmental issue; it’s a threat to our economy and to public health. That’s why we must keep fighting to change consumer habits regarding plastic consumption and pollution through public education and smart legislation, or we will continue to put what we value most at risk,” said Adrienne Esposito, Executive Director of Citizens Campaign for the Environment.
Included in the presentation, Dr. Grella discussed the Flax Pond Marine Station (located in Suffolk County) micro-plastic survey that was conducted in the fall of 2017. Through extrapolation, the amount of plastic found in the high tide zone of the marsh contained 412 pounds of plastic. On a global scale, production and consumption of plastics have continued to rise over the past 50 years and an estimated 297.5 million tons of plastic were produced in 2015.
“Plastic pollution on Long Island is a critical issue for our terrestrial and aquatic ecosystems. Plastic has negative impacts on marine health, in turn human health when marine species are consumed. Long Island students and Stony Brook University researchers have shown that clams, oysters and other bivalves cannot differentiate plastic from algae, this is problematic. As a scientist and educator I believe that combining education, research and policy is critical to curbing plastic usage on Long Island. In collaboration with organizations like Citizens Campaign for the Environment, and the support of the Suffolk County Legislature, I am confident that we can better prepare the next generation of ecologically minded citizens and make a difference here in Suffolk County,” said Rebecca Grella Ph.D.
The presentation included data from a recently conducted survey measuring the effectiveness of Local Law # 27-2016: To Reduce Single Use Carryout Bags in Retail Stores. The survey demonstrated a reduction in plastic bag use of over 50%.
Legislator Spencer, M.D., chair of the Health Committee stated, “Decisions by local governments have boundary lines, but plastics do not. It is up to us to be good stewards of our planet and protect our resources for the next generation. Science is uncovering more information about the detrimental effects of plastic on our environment and health that will impact on us for years to come.  As a county that is surrounded by beaches and bays and relies on our sole source aquifer for our drinking water, we have to find ways to protect our shorelines, our water resources and the health of our residents.”