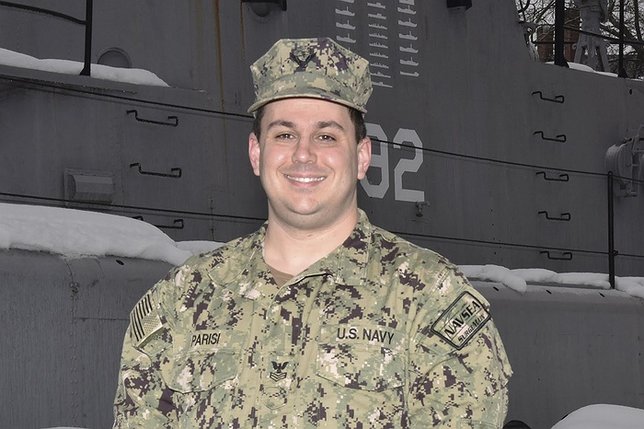 A 2001 graduate of East Islip High School and native of Islip Terrace, New York, is serving at Portsmouth Naval Shipyard in Maine, as part of the largest mobilization of reservists in Naval Sea Systems Command (NAVSEA) history. The mobilization is tied directly to the COVID-19 pandemic.
Petty Officer 1st Class Jason Parisi is one of the reserve sailors deployed to the Navy’s four public shipyards as part of the Surge Maintenance (SurgeMain) program. Established in 2005 to augment the Navy’s organic civilian shipyard workforce in times of need, SurgeMain has 2,200 enlisted reserve sailors and 240 reserve officers across 75 units.
“I joined the Navy Reserves back in 2008 when SurgeMain was still relatively new,” Parisi said.  “I've seen it go through many changes and grow to the program that it has become today. With only one year left before I retire, I am proud and honored to be a part of its first major mobilization and finally see SurgeMain supporting the mission that we have trained very hard for over all these years.”
Between mid-March and late June, up to 25 percent of the naval shipyards’ production workforce had been on administrative leave due to being at high risk for severe complications tied to the COVID-19 virus. As a result, the four shipyards collectively experienced schedule impacts for most of the ships and submarines undergoing maintenance. This delayed maintenance work could result in delays to ship and submarine maintenance which could cause disruptions to the Navy’s deployment schedules and require ships and sailors to remain forward-deployed for longer periods of time.
NAVSEA, the largest command within the Navy, oversees the construction, delivery and maintenance of all the Navy’s commissioned ships and operates four naval shipyards - Norfolk Naval Shipyard in Portsmouth, VA, Portsmouth Naval Shipyard in Kittery, ME, Puget Sound Naval Shipyard and Intermediate Maintenance Facility in Bremerton, WA, and Pearl Harbor Naval Shipyard and Intermediate Maintenance Facility in Honolulu, HI. Workers at each of these shipyards perform a vital role in national defense by performing maintenance on ships, submarines and aircraft carriers required for combat-ready fleet forces.
“The four naval shipyards are critical to providing deployable, combat-ready warships for our Sailors and Marines,” said NAVSEA’s Commander Vice Adm. Bill Galinis. “Augmenting our organic civilian workforce with SurgeMain Reservists allows us to address the maintenance challenges generated by the pandemic so we can return ships back to the Fleet.”
Parisi is a machinist’s mate responsible for testing and maintaining the integrity of the submarine's various piping systems.
“My biggest joy is being able to work with and get to know the active duty sailors attached to the subs,” Parisi said. "I was never stationed on a sub, but after speaking with the sailors and seeing the hard work they put in each and every day, it gives me a greater respect and appreciation for what they do and the sacrifices they make to keep us all safe."
According to Parisi, the values required to succeed in the Navy are similar to those found in Islip Terrace.
“My family and friends have always taught me to be positive and to look at the overall greater good," Parisi said. “There are a lot of challenges that come with being in the reserves, with this mobilization being one of them. I had to leave behind my wife, kids and a well-paying job, but knowing that what I am doing here is making such a big difference is what keeps me going.”
As a member of the U.S. Navy, Parisi, as well as other sailors, know they are a part of a service tradition providing unforgettable experiences through leadership development, world affairs and humanitarian assistance. Their efforts will have a lasting effect around the globe and for generations of sailors who will follow.
"I am proud to serve during this pandemic," Parisi added. "We have always been told that we exist so that one day, we can use our skills and abilities, acquired from both our military and civilian careers, to support our country in a time of need. Well, that time is now, and I am honored to have been selected where I can put everything I have learned so far to good use.”
By Danna Eddy, Portsmouth Naval Shipyard Public Affairs Officer