A popular vote for the naming of P4 and P5, Pluto’s two most recently discovered moons, ended on Monday. 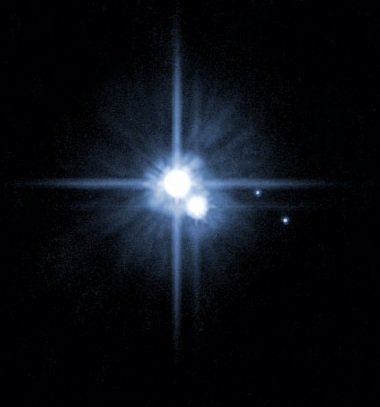 After planetary scientist Mark Showalter and his team discovered two previously unseen moons orbiting Pluto with the Hubble Space Telescope, he decided to put their naming to a vote before submitting his decision to the International Astronomical Union.

The guidelines for naming require the celestial bodies draw their designation from Greco-Roman mythology and, to fit with Pluto’s motif, have a relation to that mythos’ underworld. The second most popular choice, Cerberus, is a three-headed dog which stands guard over the gates of Hades. Vulcan—which ran away with nearly 175,000 votes—is the god of fire and the forge.  Though not exactly a dweller in the underworld, Vulcan was cast out of Olympus and is the nephew of Pluto which will provide a sufficient argument for Showalter when he presents his case to the IAU.

Of course, the real reason the name drew so many votes is its popularity among Star Trek fans. “Vulcan” was the name given both the race and home world of Leonard Nimoy’s enduring character on the original TV series, Spock. The option, and indeed the vote itself gained popularity following an endorsement via Twitter from the actor who portrayed Captain Kirk, William Shatner, stating “Let's hope the IAU thinks Vulcan is a good name” to over a million Twitter followers.  "174,062 votes and Vulcan came out on top of the voting for the naming of Pluto's moons. Thank you to all who voted,” he added, upon the vote’s conclusion on Monday.

Unfortunately, all the Trekkies who threw their support behind Vulcan could find their efforts to have been in vain. The names of the two tiny moons are ultimately the decision of the IAU, which could very well reject either or both of Showalter’s proposals when he presents Cerberus and Vulcan to the union.

They are not beholden to the online vote, and could make a strong argument for not wanting to name a moon in one of the coldest regions of the solar system after a fire god. Even Cerberus is at risk, as an asteroid has already been given that designation.

If the Astronomical Union does reject the popular choices, however, Showalter is confident Vulcan could be given a second chance in the next few years. NASA's New Horizons spacecraft will be conducting the first ever robotic flyby of Pluto in 2015, at which time it may very well discover even more moons orbiting the planetoid.