Zeldin: "The proposal to permit offshore drilling off the coast of Long Island must be shelved indefinitely." 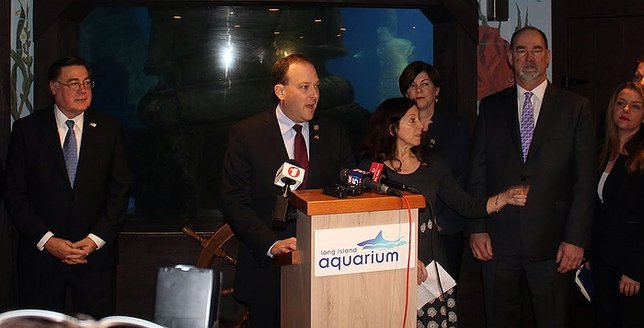 Riverhead, NY - January 29, 2017 - Congressman Lee Zeldin (R, NY-1) was joined by state and local elected officials, environmental stakeholders and business leaders at the Long Island Aquarium in Riverhead to present a united front in opposition to offshore drilling off the coast of Long Island. The Congressman was joined by Assemblyman Fred Thiele, Riverhead Supervisor Laura Jens-Smith, Brookhaven Supervisor Ed Romaine, East Hampton Supervisor Peter Van Scoyoc, Southold Supervisor Scott Russell, Suffolk County Legislator Al Krupski, President and CEO of Discover Long Island Kristen Jarnegin, Citizens Campaign for the Environment, Group for the East End, Nature Conservancy on Long Island, Sierra Club of Long Island, Audubon Society of New York, and other environmental groups.
The Department of Interior recently proposed opening 90% of the Outer Continental Shelf (OCS) to energy exploration, including parts of the Atlantic Ocean.
“Long Islanders understand that our waterways are more than just a summer weekend destination; it is essential to our way of life,” Congressman Zeldin said. “Protecting our environment goes hand in hand with protecting commerce in our region where so many jobs and small businesses depend on scenic beaches, parks and clean water to attract visitors and economic growth. That’s why, today, we requested the public comment period for this proposal be extended and that a public hearing be held here on Long Island so federal regulators understand first hand the negative impacts of this proposal. Most importantly, the proposal to permit offshore drilling off the coast of Long Island must be shelved indefinitely.”
Adrienne Esposito, Executive Director of Citizens Campaign for the Environment said, “We must say no to this risky, dangerous scheme that will turn our oceans over to the oil companies and jeopardize our climate, coastlines and communities. Oil and water don’t mix. A clean, healthy, productive ocean could be lost forever. We are thrilled that Congressman Zeldin is standing up for Long Island and our oceans, and has built bipartisan support to stop offshore drilling. Our future is in renewable energy, our past is fossil fuels. We must continue to progress with offshore wind and solar farms.”
Kristen Jarnagin, Discover Long Island President & CEO said, “Protecting Long Island’s $5.6 billion Tourism industry is paramount to our region’s economic future. We appreciate Congressman Zeldin’s leadership to safeguard our coastline of pristine beaches, which attracts more than nine million visitors annually and supports 100,000 local jobs.”
Aaron Virgin, Vice President of Group for the East End said, “We are in strong support of Congressman Zeldin’s condemnation of offshore oil drilling off Long Island, which supports nearly 350,000 jobs and generates millions of dollars through tourism, fishing, and many recreational pursuits. Instead of doubling down on a continued dependency of fossil fuels, the Trump administration should be leading the world in promoting renewable energy sources like solar and wind.”
Assemblyman Fred W. Thiele, Jr. said, "Long Island's environment and economy depend on clean oceans, bays, wetlands and beaches. All of this would be put at risk by permitting oil and gas drilling off of our coast. It is a reckless proposal which must be rejected out of hand. An oil spill off the coast of Long Island would destroy our economy and our quality of life."
East Hampton Supervisor Peter Van Scoyoc said, "We welcome Congressman Zeldin's support in opposing offshore oil and gas exploration and development along the Atlantic seaboard. A single oil spill could devastate our pristine beaches, fishing industry, and local economy. East Hampton Town is dedicated to reaching a goal of 100 percent clean, renewable energy and moving away from a reliance on fossil fuels."