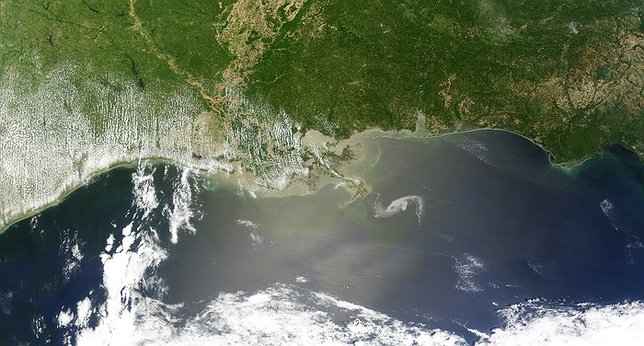 A satellite image of the Gulf Oil Spill as it crept toward the the Mississippi Delta.

Wow, just when people had all but forgotten BP’s high-profile folly with 2010’s infamous Deepwater Horizon disaster, along comes a new Hollywood biopic to remind everyone how the multinational oil and gas company was responsible for the biggest marine oil spill in the history of the petroleum industry, as well as the loss of 11 lives during the tragic drilling rig explosion. But while most media coverage of the disaster concentrated on the environmental damage the explosion and subsequent leakage of approximately 210 million gallons of crude oil over the course of 87 days into the Gulf of Mexico caused, this new “based on a true story” movie – directed by Peter Berg and featuring an impressive ensemble cast – concentrates more on the human element and the lives lost that fateful day.

The aptly-titled Deepwater Horizon, starring Mark Wahlberg, Kurt Russell, John Malkovich, Gina Rodriguez, Dylan O'Brien and Kate Hudson, begins scant hours before the accident – caused due to a “blowout” during drilling that resulted in an uncontrolled leakage of oil, followed by a subsequent explosion and the eventual sinking of the oil rig itself – while we follow Mike Williams (Wahlberg), a worker on the Deepwater Horizon just going about business as usual, but once trouble happens, it’s a fight to survive as Mike struggles not only to save himself, but his fellow employees as well.

Like I said above, the lives lost that day were kind of glossed over by the media in favor of the outrage of the public over the horrific damage perpetrated upon the environment – the oil spill caused massive, long-standing destruction to water, land, wildlife, and businesses such as the fishing industry that will be felt for decades to come – and while that is a terrible, terrible crime indeed (BP was later found to be "reckless" and "negligent" in regards to the incident and ordered to pay billions of dollars in cleanup costs and fines), I never felt that the fact that 11 human lives ended on that day, in addition to 17 other people being injured, is something that is no less terrible, and it’s nice to finally see that aspect of this disaster being addressed in force.

Deepwater Horizon is a fast-paced, chaotic, and exciting film that really drives home what happened to the people who were unfortunate enough to be stuck on the Deepwater Horizon that day things went kablooey; it’s impressive cast does the most they can do with a solid but not remarkable script, as character development is almost nil and takes a back seat to people reacting to things blowing up – which is done with great competence, by the way – but that’s not to say that the acting isn’t top shelf in quality. Mark Wahlberg excels in playing an everyman, and he does so here once again; his performance is buoyed even more by superb supporting player such as the great Kurt Russell – who really should be cast in every film ever made – John Malkovich, whom you sadly don’t see in movies as much these days, and Kate Hudson, who plays Wahlberg’s wife.

On a technical level, Deepwater Horizon impresses due to the fact that CGI was eschewed when possible in favor of physical effects, even going so far as to build an 85 percent to-scale recreation of the oil rig, complete with working helicopter pad. It’s attention to detail like that that makes it easier to buy into the reality that a film it trying to project, as opposed to something that looks like a cartoon; that degree of unreality can undo a film in an instant and it’s hard to regain that suspension of disbelief without some serious effort.

So, I give fans of disaster movies, as well as people wanting to learn a little something about one of the biggest ecological disasters in recent memory – even if parts of it are clearly made-up due to being stuck with the “based on a true story” tag, which means it’s really “dramatized for audience enjoyment” – then I recommend you check out Deepwater Horizon.