Nearly 80 years after the Nazis invaded France, the family of Rosette Priever Gerbosi donated the only item left from their pre-war Parisian home 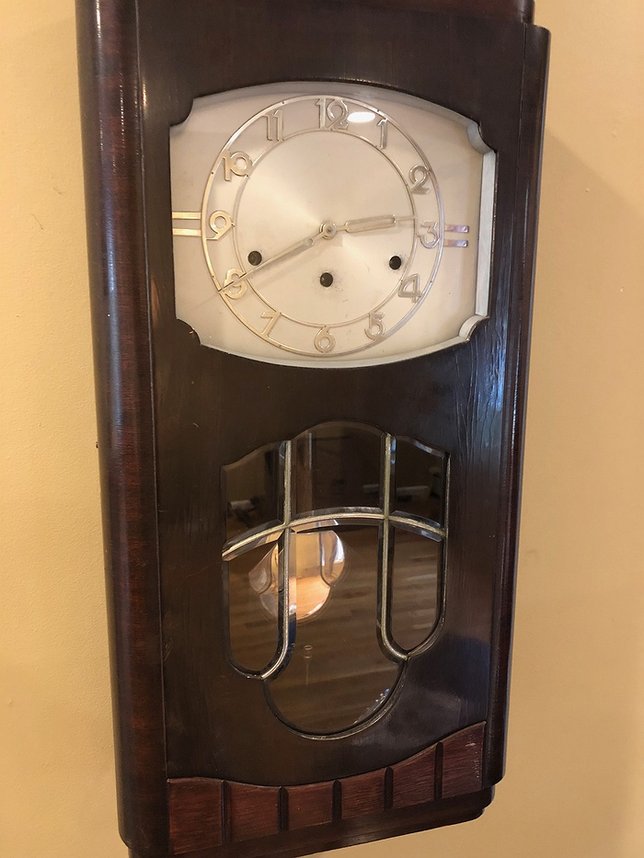 Nearly 80 years after the Nazis invaded France, the family of Rosette Priever Gerbosi donated the only item left from their pre-war Parisian home, a stately mahogany wall clock, to the Holocaust Museum and Tolerance Center of Nassau County. On Wednesday January 6, the Center will show the clock for the first time and discuss its history over Zoom, helping people born decades after the Holocaust come to terms with the horror of genocide.


At some point in the late 1930s, Rosette’s parents, Dora and Shama, Polish immigrants, purchased an Art Deco timepiece of unknown provenance and installed it on the wall of their apartment in the Marais, Paris’ historic Jewish neighborhood. The clock chimed melodiously on the hour and half-hour, audible from everywhere in the apartment on Rue des Francs Bourgeois.


“My father was a furrier, and my mother cooked professionally,” Mrs. Gerbosi recalled last week. “They worked very hard together and became very successful in the fur business once I was born. My mother called me their mazel,” meaning luck. She still beams at the memory.


She added, “To this day I can visualize the polished oak floors, the modern ebony furniture, the newly-built bathroom, and the paintings. Everything was exquisite. I remember pushing my doll carriage around and around the dining room.”


All feelings of safety disappeared after the Nazis marched into France in 1940.  Thousands of French citizens and residents, including her father, were forced to work for the German war effort. Nazis and collaborators arrested tens of thousands of French Jews, including Rosette’s parents, sending them to concentration camps. More than 11,000 children were expelled from schools and killed, according to government estimates.  Still, Mrs. Gerbosi remembers the school’s headmistress insisting Jewish students be treated kindly, and secretly sustaining resistance fighters. Her parents managed to hide her with the relatives of Christian neighbors in the Perigord region in the southwest.


Rosette’s older brother Bernard joined the Resistance. Her mother’s sister Suzanne, a seamstress who once worked for Coco Chanel, fled the country. Her parents were arrested and sent to the gas chamber at Auschwitz. Before they vanished, her father hid the wall clock with trusted neighbors.


After the war Bernard retrieved the timepiece, all that remained from their family’s home. He wrapped the clock in a blanket and took it with him when he sailed to America in 1946.


Rosette soon followed, and the siblings reunited in New York. Living first in Brooklyn, she graduated from Erasmus Hall High School, then Brooklyn College. She married and started a family on Long Island, living in Woodbury, Syosset and Bayside. In 1996  she remarried and moved to Naples, Florida.


Last year, Bernard died. Her son, Robert Fishman, who helped care for his uncle as his health failed, inherited the clock. At his mother’s suggestion, Mr. Fishman donated the clock to the Holocaust Center, where he is a board vice-chair.

“To preserve the memory and significance this clock has had on both my uncle and my mother, we decided to donate it to the Center,” said Mr. Fishman.


The Prievers’ wall clock offers a window into an often-overlooked historical aspect of the Holocaust, said Thorin Tritter, the museum director. “The clock draws our attention to the Nazi invasion of France in 1940 and the horrors of the Holocaust in France,” he said. “It also highlights the resilience of this one family and the support they got from trusted neighbors.”


He added, “The clock became a bridge for the descendants in the U.S., linking them to the pre-war history of the family.”

Andrea Bolender, the Center’s chair, noted that objects such as the recently-donated clock “movingly remind us what was lost when the Nazis tried to destroy Jewish life in Europe. It’s important that we remember.”


Asked to recall the tragic events of those times, Rosette remembers the pain of seeing French citizens executing collaborationists in the last days of the war. She lovingly extols the Christian neighbors and the kind parish priest who protected her. Holocaust historians agree that French Jews survived at a significantly higher rate than in Eastern Europe.


“We had hoped to find out that our parents had survived Auschwitz,” Mrs. Gribosi said. “We were devastated to learn they hadn’t.”


In Naples, Mrs. Gribosi is an active docent at the Southwest Florida Holocaust Museum. She often speaks to groups of school children, reminding them to value their families, appreciate the freedoms provided in America, and – especially - to respect the differences between different races and religions.
“We are all different colors and religions, and different genders, but we are all human beings,” she said. “I have devoted myself to promoting tolerance and fighting bigotry in any way I can. My mother was right, my mazel still prevails. I am here to relate my tale!”