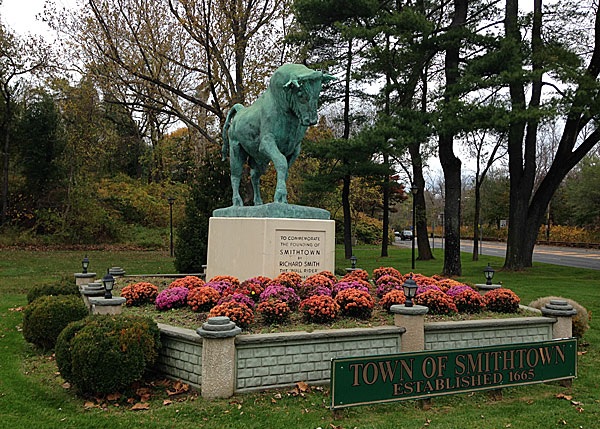 The Smithtown bull commemorates the legendary ride of Richard Smith.

The Town of Smithtown is located on the north shore of Long Island in Suffolk County, New York. The town, settled in 1665, is named after its founder, Richard Smith, who is said to have earned the land by riding its perimeter in one day on a bull.  Smith chose the longest day of the year to make his ride, and one of the borders of the town, Bread and Cheese Hollow Road (which separates Smithtown and Huntington) is where Smith stopped to eat a lunch of bread and cheese during his ride.  This bull can be seen in life-size statue form at the intersection of the Jericho Turnpike and Route 25-A in Smithtown.

Villages in the Town of Smithtown

Hamlets in the Town of Smithtown