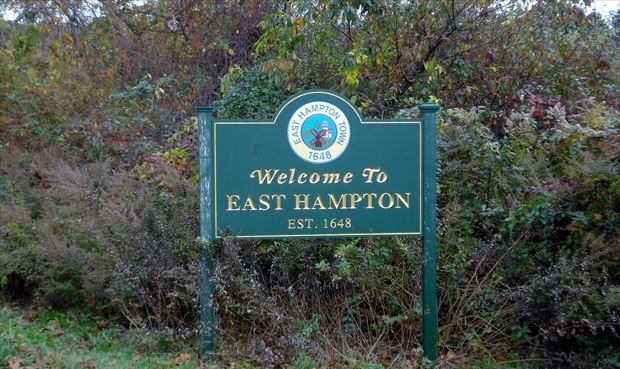 East Hampton is a popular destination for tourists.

East Hampton was the first English settlement in New York. At the time of European contact, several varying cultures of indigenous peoples were present in the East Hampton area.  The Montaukett people controlled most of Long Island's east end.  Chief Wyandanch negotiated the sale of land in the area surrounding East Hampton, including that of Lion Gardiner, an English colonist who settled Gardiner's Island.  Future trades with Native Americans guaranteed their rights to hunt, fish and remain on the land at their will, and to harvest the tails and fins of beached whales. However, town officials requested reimbursement for the rum shared with the Native Americans during negotiations.

Whaling was a major industry in East Hampton. The proper handling of beached whales was written into town laws, thus demonstrating the seriousness of the industry for locals. As the demand for whale products grew, residents took to the water to harvest whales that came near the shore.

The infamous story of La Amistad, a slave ship that had been commandeered by its captives, anchored off the coast of East Hampton in 1839 and made national headlines prior to the Civil War.  A U.S. Supreme Court decision, reached in 1841, found in favor of the slaves who were determined to be illegally captured.

Famous residents of East Hampton include Jaqueline Bouvier Kennedy Onassis.  Former President and First Lady/Secretary of State Bill and Hillary Clinton frequently summered in East Hampton.  Today, East Hampton is still considered a "playground for the rich," but the medium household income among permanent residents in the town is just $52, 201.  According to the 2010 census, the population is 24, 724.

Villages in the Town of East Hampton

Hamlets in the Town of East Hampton