Wilbur, a hound mix, was transported to Grady Animal Hospital in Sayville. 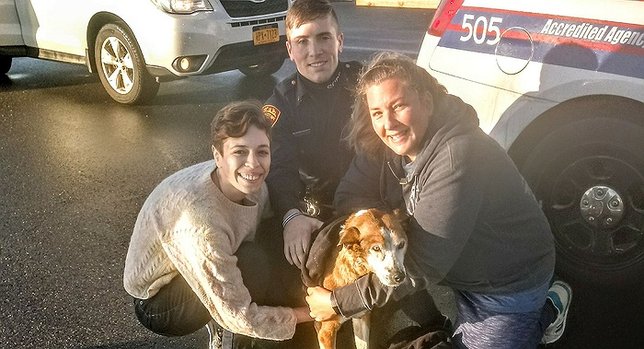 West Sayville, NY - December 31, 2018 - Suffolk County Police officers and good Samaritans rescued a dog that was in distress in the Great South Bay in West Sayville on Saturday, December 29.
Fifth Precinct Police Officers Ryan McAdam and Dave Verrelli responded to the dock on West Avenue after Ary McCarthy observed a dog struggling in the water and called 911 at approximately 8:15 a.m. While officers were responding to the scene, McCarthy, along with Good Samaritan Beth Higbie, entered the water to rescue the dog that was clinging to floating debris. With the assistance of the officers, the dog was brought to safety and wrapped in towels.
Wilbur, a hound mix, was transported to Grady Animal Hospital in Sayville. Wilbur had wandered from his yard on Atlantic Avenue in West Sayville. He has been reunited with his owner and is expected to make a full recovery.