SCPD Searching for Woman Who Attempted to Use Counterfeit $100 Bill

The woman attempted to pay for the two items at a local Riverhead store on November 22nd. 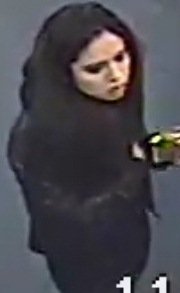 The Town of Riverhead police department is on the lookout for a woman who attempted to purchase several items at a local store with counterfeit cash. The incident took place at the end of last month on November 22nd.
On that day, the accused assailant entered the store at around 7:45 p.m. At the register she paid for her two items with a counterfeit $100 bill. The woman then fled from the store after the transaction was completed. As of right now the only picture of the brunette counterfeiter is a blurry surveillance photo from a camera inside the store.
Suffolk County Crime Stoppers are currently offering a cash reward of up to $5,000 for information that leads to an arrest. Anyone with information about the crime is asked to call anonymously to Crime Stoppers at 1-800-220-TIPS. All calls will be kept confidential.
Another incident involving counterfeiting on Long Island happened during the Spring at Belmont Park. On May 19, 2012, the cashier, Karen Pommells, 30, of St. Albans, Queens,  was accused of knowingly accepting $4,800 in counterfeit cash from two associates. With the transacation complete, she gave them a receipt that allowed them to walk out with $4,800 after visiting a different cashier.
“This defendant didn’t just break the law, she broke the trust placed in her by her employer and the people of New York,” Rice said. “Ms. Pommells now faces criminal prosecution and serious consequences. I thank NYRA for their assistance in this investigation.”
Pommels was arrested on August 19th, 2013 at the park by District Attorney Squad detectives. She was charged with Criminal Possession of a Forged Instrument in the First Degree, Grand Larceny in the Third Degree, and Conspiracy in the Fourth Degree. If convicted she faces up to fifteen years behind bars.
[Source: Suffolk County Police, Nassau County District Attorney Kathleen Rice]