Though the Super Bowl will be held at MetLife Stadium in February, football season has drawn to a close for New York. 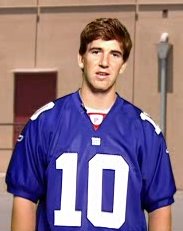 Manning Hurt as Giants End Season 7-9
The Giants-Redskins game on Sunday began as a microcosm for both teams’ beleaguered seasons. A wet, sloppy game at MetLife Stadium saw five three-and-outs in just the first quarter as neither team was able to convert on third down. New York was the first to find a scoring opportunity in a drive that bridged the first two quarters, but on 4th and 2 from the Washington 32 they took the safe route and attempted a field goal; Josh Brown missed from 50 yards out.

Big Blue’s next possession was short lived—after an incomplete pass on first down, Andre Brown fumbled the ball near the Giant 20-yard line and the Redskins came up with it. A strong defensive stop held Washington to just 5 yards, but they still came away with a field goal for the first score of the game.

Not willing to end a poor season on a sour note, Manning came right back and marched his team across the field. A 30-yard catch-and-run by Jerrel Jernigan got New York back into Washington territory, and a 24-yard toss from Eli to Jernigan put them in the end zone. Both teams would kick another FG before the end of the quarter, sending the game into the half with the Giants up 10-6.

After the break, Curtis Painter came on in place of Eli Manning, who had suffered a high ankle sprain and then threw a pick in the final two plays of the second quarter. Painter was given a golden opportunity early on when the Giants recovered a fumble at the Washington 16, but quickly returned the favor by throwing an interception. After several more unsuccessful possessions, the Giants got the ball back at midfield and on first down Jernigan ran 49 yards to close out the third quarter with the second New York touchdown.

Josh Brown ended the first New York drive of the fourth quarter with a 38-yard field goal. The G-Men took a 20-6 lead, and that score held through the final five minutes of the game.

Manning went 10/24 for 152 yards, a TD, and an interception before leaving the game with an injury. Painter went 2/8 for 11 yards and an interception. Jernigan led in both receiving and rushing with 90 yards on 6 catches and 57 yards on two carries to go with a touchdown both on the ground and through the air. Peyton Hillis ran for 56 yards on 17 rushes, and Hakeem Nicks caught two balls for 50 yards. Justin Tuck had two sacks on the day.

With a record of 7-9, Eli will have all the time he needs to heal his ankle, but the Giants will have a lot of work to do in the offseason. New York’s offensive line has been feeble all year long, the team’s running game was inconsistent at best, and Manning himself hardly looked the part of a two-time Super Bowl MVP.

Jets Dash Dolphins’ Playoff Hopes
The Jets were better able to sustain a drive in the first quarter of Sunday’s game in sunny Miami than were their siblings back home, but the opening 15 minutes went scoreless all the same. It was not until three minutes into the second that the Dolphins were able to break the 0-0 tie as Ryan Tannehill capped off a nearly 7 minute, 90-yard drive with a 5-yard touchdown pass.

New York went three-and-out on its next possession, but Geno Smith was able to get them deep into Miami territory with a 23-yard throw to Santonio Holmes. 5 plays and 24 yards later, Sheldon Richardson was running up the middle for the tying TD.

Following a quick Dolphin possession, the Jets began a second march toward the end zone to end the first half. After brining his team across the field, Smith tried to run the final 7 yards of the way on 3rd down; he was stopped by Miami linebacker Dannell Ellerbe, but Bilal Powell ran up and shoved his quarterback past the goal line, giving Gang Green a 14-7 lead.

The third quarter went much the same as the first, with neither team able to put any more points on the board. Miami got close, but Tannehill threw an interception at the Jets’ 22 late in the quarter, setting New York up for a drive that took them all the way to the Miami 18. In a rare miss, Nick Folk kicked it wide right from 35 yards out.

Folk would get another opportunity later in the fourth, and one more after that. He made both—the first from 35 yards, the second from 26—and the Jets went ahead 20-6. Another Tannehill interception with 1:30 left on the clock would put an end to the game, as New York knocked the Dolphins out of playoff contention.

The Jets finished the season with an 8-8 record. After alternating wins and losses for much of the year, they followed a three-game losing streak by winning three of their last four. Head Coach Rex Ryan, whose future has been in question throughout the season, says that he will return for the final year of his contract and is in talks for an extension.

Islanders Split Weekend Games
The Islanders have has a few more wins too their name in late December than they had in the previous few weeks, but they are still far from a playoff contender. Saturday’s game against the Devils saw them fall behind 1-0 midway through the first period on an Adam Henrique backhander.

New York was not able to get on the board itself until 10:31 through the third when Frans Nielsen landed a wrist shot. That goal was good enough for a tie, but Travis Zajac quickly put the Devils ahead again on a deflection, and New Jersey went on to win 2-1. Evgeni Nabokov stopped 23 of 25 shots on the night.

Last night’s match against the Wild started out no better. Minnesota took a 1-0 lead 3:22 into the game, and doubled their advantage 39 seconds into the second period. They were up 3-0 just over two minutes later.

John Tavares scored the first Islander goal 8:45 through the second, and Cal Clutterbuck made it a 1-goal game with 62 seconds left before the third.

Thomas Hickey tied things up in the early going of the final period, and Kyle Okposo slapped in the go-ahead 12:13 through the frame. The Wild scored again a minute-and-a-half later, but Okposo knocked in his second of the night 27 seconds after that to put New York back on top 5-4.

The Islanders hung on to win it, as Kevin Poulin stopped 33 of 37 shots. They will play the Bruins next, at 7:00 PM tomorrow.

Rangers Top Tampa
The Rangers travelled to Tampa Bay for the second of five-straight road games last night. Fresh off a loss to Washington, Rick Nash put New York on the board early with an assist from Derek Stepan 4:30 through the first. The Lightning tied the game six minutes later on a power play, and pulled ahead with four minutes to go with an Ondrej Palat wrist shot, but the Rangers got a power play of their own to work with and Mats Zuccarello tipped in the tying goal before the period was over.

New York continued to thrive on the power play in the second period, taking a 3-2 lead on a Chris Kreider backhanded shot and doubling the spread on a Benoit Pouliot tip in. Tampa managed a third goal in the final period, but was not able to score again. The Rangers took a 4-3 win as Henrique Lundqvist blocked 37 of 40 shots on the night.

The Rangers will stay in Florida to play the Panthers at 5:00 PM tomorrow.

Nets Outpaced by Indiana
The 10-19 Nets looked surprisingly strong in the early going against the 23-5 Pacers on Saturday night. A strong team effort kept Brooklyn just two points off the lead in the first quarter, trailing 29-27 going into the second, and the team kept pace with Indiana before the half, entering the break down 58-56.

Unfortunately, the third quarter proved the Nets’ undoing yet again, as Brooklyn fell behind by 11 four minutes through the period. An Anderson 3 would bring them back within 3 late in the frame, but the Pacers pulled ahead again and took an 86-76 advantage into the fourth. Brooklyn made no progress in the last quarter, and ultimately fell 105-91.

Paul Pierce led the team in the loss with 18 points, followed by Teletovic with 17. Williams put up 14 from the bench, and Anderson shot for 10.

The Nets will play the Spurs next, at 7:00 PM tomorrow night.

Knicks Beaten by Raptors
After blowing a considerable lead against the Raptors and being outscored 29-12 in the fourth quarter of Friday’s game, the Knicks traveled to Toronto for the second half of a home-and-home on Saturday. Still missing Carmelo Anthony, the Knicks managed to stay close to the Raptors for most of the first quarter, falling behind by 6 at one point, but closing the frame out with a Martin dunk to head into the second down 26-22.

New York led briefly in the second, but a 12-0 run quickly put Toronto ahead 44-34, and the Raptors went on take a 13-point lead by the end of the half. The Knicks did little damage in the third, and though Amar’e Stoudemire led them back within 6 points late in the fourth, a flagrant foul on Murry gave Toronto the chance to scored 5-in-a-row and bury New York. The Raptors won 115-100.

Stoudemire led the Knicks with 9 rebounds and 23 points on 9-12 from the field over half an hour of play. Tyson Chandler scored 16, JR Smith put up 13, Bargnani and Hardaway both shot for 12, and Toure Murry scored 11 in the loss.

The Knicks will play the Spurs right after the Nets do, heading to San Antonio at 8:30 PM on Thursday night.