With inclement weather all but guaranteed and plenty of patrons still visiting malls and shopping centers, parking lots can be deceptively dangerous. 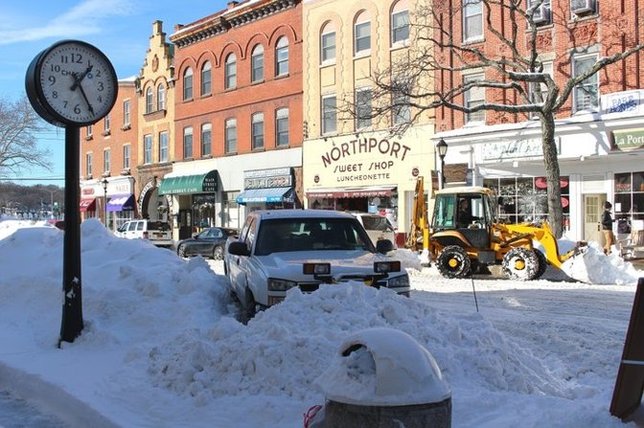 Northport Village after a January snowstorm.

Photo by: Brian Re

The holidays can be an incredibly hectic time of year. Given that many people have many parties to attend, gifts to shop for, and friends and family to visit, it's no small wonder that so many are rushing about this time of year.
Of course, much of that rushing occurs while we're behind the wheel of a car, trying to get to a party on time or to a shopping center before the lines get too long. With so much to do and so many distractions, it can be easy to forget that these cars, trucks, and SUVs we drive are not simply convenient vehicles, but also potentially deadly machines.
The days surrounding Christmas and Hanukkah this year were, sadly, a grim reminder of that fact on Long Island. A Jeep traveling along Woodbury Road in Hicksville on the morning of Christmas Eve evidently lost control and struck a tree, sparking a fire and claiming the lives of its two occupants. A Commack man crashed into a hot dog truck in North Bellport on the afternoon of December 26th; he was driving under the influence of drugs and had a toddler in the vehicle with him, but thankfully no one was seriously injured in that incident.
While one might think that these sorts of incidents are only liable to occur out on the highway, it's important to remember that cars can be just as dangerous outside of businesses. Though Christmas may have come and gone, there are still more holidays to be celebrated and many people will be out returning unwanted gifts or using up gift cards received in recent days, meaning that parking lots and shopping malls are liable to be just as busy now as they were before December 25th.
A multi-vehicle accident killed one woman and seriously injured another man in East Northport on the 26th when one vehicle struck several others, as well as the side of a Mario's Pizza. On December 23rd, Suffolk Police responded to an incident at the Smith Haven Mall in which a woman evidently suffered a medical incident, causing her to drive her car into a pole and the nearby building. She was pronounced dead after being transported to the hospital.
In fact, a recent study by the National Highway Traffic Safety Administration found that from 2012 to 2014, an average of just under 1,900 people were killed in non-traffic motor vehicle crashes, and that an additional 92,000 were injured in such crashes. The study also found that roughly a third of both the injuries and the deaths were from non-occupants such as cyclists and pedestrians.
With an increase in traffic and the potential for hazardous weather this time of year, it is vital to remember basic safe practices, even when driving or walking through generally low-speed areas such as shopping mall parking lots.
Simple tasks such as looking both ways before crossing the street and being aware of one's surroundings might seem like a no-brainer, but pedestrians and motorists alike should make certain to do so. Similarly, using one's turn signals before making a turn can prevent potential crashes.
Some helpful practices, however, may seem a bit more counterintuitive. For example, local traffic law and accident experts at the Law Office of Cohen & Jaffe suggest backing into one's parking space when in a parking lot. Though it may be a little more difficult to back into the space than to pull in front-first, doing so has actually been found to be the safest way to park as it greatly increases the driver's field of view when he or she pulls out of the space.
This position is further supported by the American Automobile Association, which has found that backing-in is still the safest way to park even in newer vehicles with safety features such as rear-view cameras.
[Source: AAA, Law Office of Cohen & Jaffe, NHTSA]