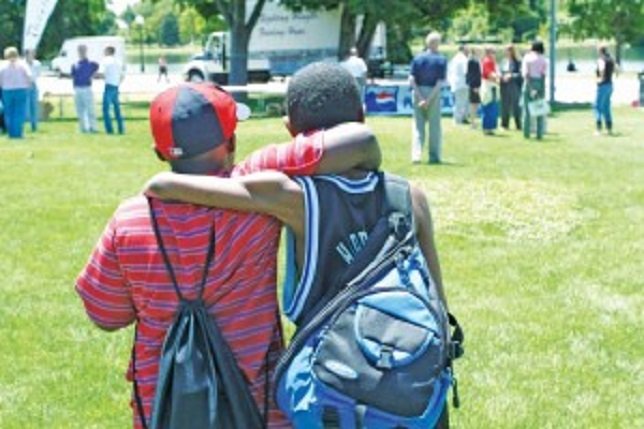 Kids Weekend Backpack Program provides supplemental meals for children who rely on school breakfast and lunch programs during the week, but may not have enough to eat over the weekend.

Half of the funding, $37,500, will help fund the Kids Weekend Backpack Program, which began in 2006, providing supplemental meals for children who rely on school breakfast and lunch programs during the week, but may not have enough to eat over the weekend. Each Friday during the school year, Island Harvest supplies children in 26 schools among seven school districts who are food insecure with packs of nutritious, shelf-stable food, including enough for two lunches, two breakfasts, two snacks, and two servings of milk. During the 2013-2014 school year Island Harvest distributed more than 50,000 food packs through the program.

The remaining funds will be used to help Island Harvest collect and distribute an expected 10 million pounds of food and supplies throughout calendar year 2015. Food and supplies are collected though a number of sources including from food retailers and wholesalers, local food drive collection events, donations from Long Island’s farming community and others, and then distributed to those in need through Island Harvest’s network of approximately 500 nonprofit agencies and directly through its mobile food pantries.

“Island Harvest is grateful for the continued support of Newsday Charities, a McCormick Foundation Fund in helping s in our mission of reducing food waste and ending hunger on Long Island,” said Randi Shubin Dresner, president and CEO, Island Harvest. “Their direct support is making a difference in the lives of our Long Island neighbors in need.”

About Hunger on Long Island
Hunger is a state in which people do not get enough food to provide the nutrients for active and healthy lives. It can result from the recurrent and involuntary lack of access to food. More than 316,000 Long Islanders face the risk of hunger every day, according to Island Harvest Food Bank and Feeding America, a national hunger-relief organization. These are often hard-working adults, children, seniors and veterans who cannot always make ends meet and are often forced to go without food. Approximately 70,000 individuals seek food assistance in Nassau and Suffolk counties each week through soup kitchens, food pantries and other feeding programs served by Island Harvest.

About Island Harvest Food Bank
Island Harvest Food Bank is a leading hunger-relief organization that provides food and other resources to people in need. Always treating those it helps with dignity and respect, its goal is to end hunger and reduce poverty on Long Island through efficient food collection and distribution; enhanced hunger-awareness and nutrition-education programs; job training; and direct services targeted at children, senior citizens, veterans and others at risk. Approximately 94 cents of every dollar donated to Island Harvest goes to programs that support more than 316,000 Long Islanders. Island Harvest is a lead agency in the region’s emergency-response preparedness for food and product distribution, and is a member of Feeding America, the nation’s leading domestic hunger-relief charity.  More information can be found at www.islandharvest.org.