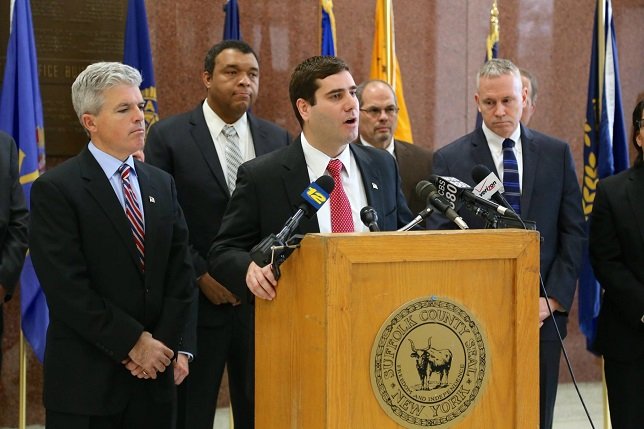 Sini served as County Executive Bellone’s chief criminal justice advisor since August 2014 as he provided his expertise on all matters pertaining to law enforcement and public safety, and served as the County Executive’s liaison with the county’s Police Department, District Attorney’s Office, Sheriff’s Office, Department of Probation, Fire, Rescue and Emergency Services and Medical Examiner’s Office.

Prior to his tenure as Suffolk’s Assistant Deputy County Executive for Public Safety, Sini served as an Assistant United States Attorney from 2010-2014.  In his role as a federal prosecutor and investigator, Sini specialized in violent crimes, gang prosecutions and large scale narcotics cases.  Sini successfully prosecuted numerous murderers, including high-ranking gang members and hitmen.

“As a lifelong Suffolk County resident who has devoted my life to law enforcement, this is an incredible honor,” said Tim Sini.   “As Commissioner of the Suffolk County Police Department, I intend to build upon the highly effective strategies implemented by the Department, including intelligence led policing, and introduce new strategies to address areas where improvement is needed.  I will continue the policies that have enabled the fine men and women of this Department to drive crime down to all-time lows.”

“Building upon our community policing model is also of paramount importance.  We must continue to prioritize public engagement, cultivate our relationship with the community as true partners in fighting crime and quality of life issues, and empower and enable residents of high crime areas to become leaders and stakeholders in their communities.”

In his current role as Assistant Deputy County Excutive for Public Safety, Sini has implemented various criminal justice and public safety initiatives, policies and reforms.  These initiatives have included the development of gang prevention programs that are designed to prevent children from becoming involved in gangs, the development of crime prevention strategies for high crime areas, and the implementation of new programs to address the county’s current opioid epidemic.

“I have worked well with Tim in his current capacity on a multitude of issues and I support the County Executive’s choice to nominate him for this new position,” stated Noel DiGerolamo President, Suffolk County Police Benevolent Association.  “I am confident that Tim will continue the Suffolk County Police Department’s strong tradition of serving the community.  I know that we can continue to work together to collectively address the needs of the department and the public to keep Suffolk County one of the safest counties in our nation.”

Sini, working collaboratively with Sheriff Vincent DeMarco, also played a leading and prominent role in the county’s agreement with New York State that resulted in the lifting of the mandate to build a jail in Suffolk County, which saved taxpayers over $300 million.

“I have worked closely with Tim Sini and I know he has the right kind of law enforcement experience Suffolk County needs in its next Police Commissioner and the kind of vision and integrity we need more of in government as a whole,” stated Suffolk County Sheriff Vincent DeMarco.  “We have worked together to help save Suffolk County residents $300 million by avoiding the need to build a new jail in Suffolk County and I look forward to continuing to work with him in this new role.”

Sini’s most notable case was the successful prosecution of one of the largest gang cases in United States history involving the Trinitarios gang, which included the conviction of over 100 members and its national leader.  Sini also successfully prosecuted the first ever federal case involving a synthetic drug known as “bath salts.”

“Tim Sini served with distinction in the United States Attorney’s office where he led some of the largest gang cases in its history. He made our community safer, and he did so while upholding the rule of law with integrity. Tim has the experience, work ethic and effectiveness to serve Suffolk County residents as Police Commissioner,” said Rich Zabel, former Deputy United States Attorney, Southern District of New York.

Sini serves in a variety of additional roles throughout the region, including as a regional county representative on the White House’s Office of Drug Control Policy New York/New Jersey Regional High-Intensity Drug Trafficking Areas (HIDTA) Team, the executive director of the Suffolk County Criminal Justice Coordinating Council and a pro-bono general counsel to Project9Line – a non-profit organization that assists veterans suffering from PTSD.