At the federal courthouse in Central Islip, NY, Khalif House pleaded guilty to an indictment charging him with conspiracy to commit armed robberies in connection with 40 knife-point robberies. 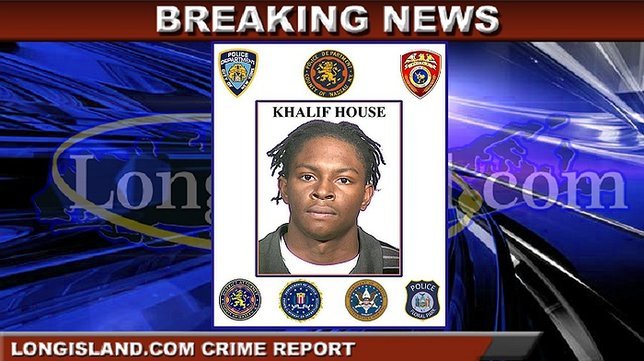 Khalif House, 24, with a last known address in Hempstead, plead guilty in connection to multiple knife point robberies that have occurred in Nassau, Suffolk, and Queens counties.

Central Islip, NY - December 20, 2016 - Today, at the federal courthouse in Central Islip, New York, Khalif House, 24, of Hempstead, pleaded guilty to an indictment charging him with conspiracy to commit armed robberies in connection with 40 knife-point robberies that he and his co-conspirators committed between February 9, 2015 and June 7, 2016.  The announcement of the guilty plea was made by Robert L. Capers, United States Attorney for the Eastern District of New York.

As part of the plea, House admitted his role in each of the robberies which occurred in Nassau, Queens and Suffolk Counties, including at Carvel, Dunkin Donuts, Subway and 7-Eleven stores (a complete list of the robberies that House allocuted to is attached hereto as Exhibit 1).  On almost every occasion, House robbed stores wearing mismatched gloves, with his face covered, while brandishing a knife.  During one of the robberies, House chased down a fleeing employee, dragging her back into the premises to prevent her escape.  On another occasion, in order to avoid apprehension, House cut an employee, who attempted to disarm him during a robbery.  House was ultimately apprehended in Floral Park, on June 8, 2016, following the attempted robbery of a Dollar Tree store located in Queens.  When the Floral Park Police located House, he was hiding in a stranger’s van, and in possession of, among other things, mismatched gloves.

“The defendant engaged in a widespread and dangerous pattern of knife-point commercial robberies, which terrorized the communities and jeopardized the safety of the employees of more than three-dozen local businesses.  As a result of the diligent work and collaboration of federal and local law enforcement authorities, the defendant will now be held accountable for his actions,” stated United States Attorney Capers.  Mr. Capers extended his grateful appreciation to all of the participating law enforcement agencies for their invaluable assistance in this case.

The government’s case is being handled by the Office’s Long Island Criminal Section.  Assistant United States Attorney Mark Misorek is in charge of the prosecution.