Suffolk County Sheriff: Elf on the Shelf Arrested for Acts of Mischief

The Elf was charged with Attempting to Distract the Sheriff from his Duties and 439 counts of Silly Mischief in the 3rd Degree. 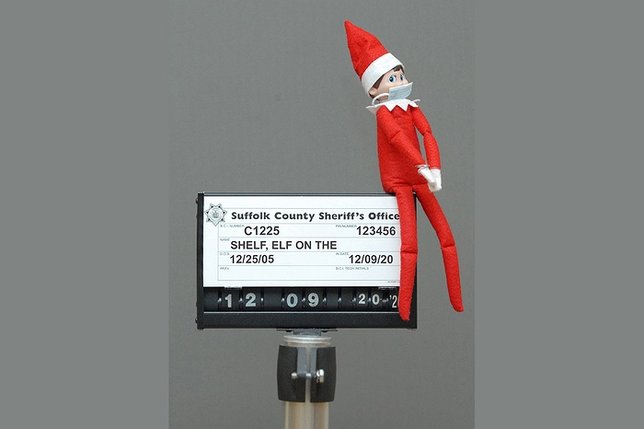 The Elf was caught in the act attempting to refile important paperwork in the wrong cabinets in Sheriff Toulon’s office.

Suffolk County Sheriff Errol D. Toulon, Jr. announced today that the Elf on the Shelf has been arrested and is currently incarcerated in the Suffolk County Correctional Facility.
Suffolk County residents have been posting photos to social media of the Elf allegedly destroying kitchen countertops, making messes in bathrooms, and swinging from dining room chandeliers. These acts of mayhem have been occurring since the beginning of December.
Today, the Elf was caught in the act attempting to refile important paperwork in the wrong cabinets in Sheriff Toulon’s office. He was charged with Attempting to Distract the Sheriff from his Duties and 439 counts of Silly Mischief in the 3rd Degree.
Sheriff Toulon explained how difficult of an arrest this was to make. “Everyone knows that you can’t touch the Elf on the Shelf. Deputies making the arrest had to ask the Elf to apply the handcuffs to himself. He then was transported to the jail in the glove compartment so he couldn’t slip out the window. The Elf is now under COVID-19 quarantine for 14 days and has been issued two tiny face masks.”
It has not been determined whether or not this Elf found in Sheriff Toulon’s office is the same Elf accused of the mischief occurring in households throughout the county. When questioned by investigators, the Elf just stared back with a blank stare and refused to speak or move. However, when the investigators left the interrogation room and returned a few minutes later, the Elf had spilled coffee all over the table and was sitting on the top of the door frame. He will be placed under constant observation.
The Elf has already retained legal counsel, a Mr. Rudolph R. Reindeer, Esq. Mr. Reindeer stated, “This poor elf has been framed. He was just trying to help children follow the rules and be good boys and girls before Christmas. He is employed at the North Pole and reports back to his employer, Mr. Chris Kringle, about whether or not the children have been behaving. Why would he misbehave himself?”
A court date has yet to be determined. For more information, and to follow this case, visit the Suffolk County Sheriff’s Office on Facebook, Instagram, or Twitter.