Legislator Lafazan presented Nassau County Citations to each of the athletes and their coaches to commemorate the accomplishment. 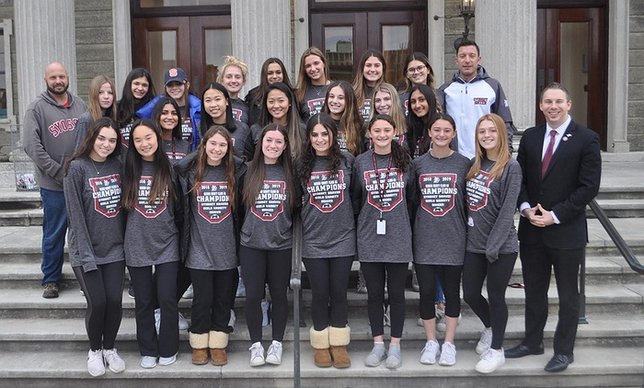 Mineola, NY - December 21, 2018 - Nassau County Legislator Joshua Lafazan (Woodbury) welcomed Syosset’s girls varsity soccer team to the Legislature on Monday, Dec. 17, where he congratulated them for capturing the Nassau County Class AA championship.
Legislator Lafazan presented Nassau County Citations to each of the athletes and their coaches to commemorate the accomplishment. Syosset defeated No. 2-ranked East Meadow in penalty kicks in the Nassau County finals to cap their 8-6-2 season. Junior Kendall Halpern not only played goalie in the penalty kicks, but when the team needed a goal, she took off the gloves and scored a decisive tally.
“Coach Joe Marchetta, Coach Ian Incremona, and Athletic Director Drew Cronin led an extraordinary group of young women who not only performed admirably on the field but were consistently lauded all season for their sportsmanship and fidelity to Syosset P.R.I.D.E. (Patience, Respect, Integrity, Dignity, Empathy). I am so proud to recognize such a wonderful group from my hometown, and am honored to serve as their Legislator,” Lafazan said.