Governor Cuomo announced high-speed open road, cashless tolling will be completed on all MTA-operated bridges and tunnels in the NY metropolitan region by the end of 2017. 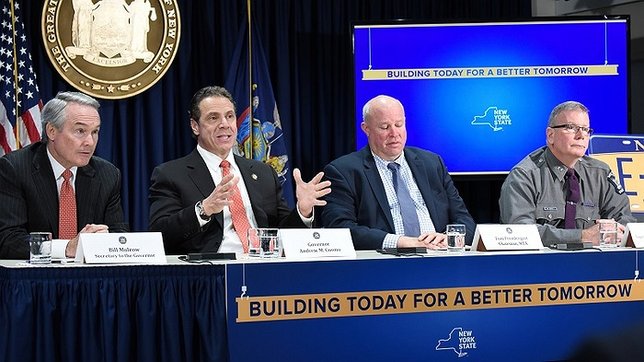 Albany, NY - December 21, 2016 - Governor Andrew M. Cuomo today announced high-speed open road, cashless tolling will be completed on all MTA-operated bridges and tunnels in the New York metropolitan region by the end of 2017, with automatic tolling beginning at the Hugh L. Carey and Queens Midtown Tunnels next month. The state will also deploy 150 State Troopers beginning in January at MTA bridges and tunnels to enhance security at key checkpoints, bolster counter-terrorism efforts and hold scofflaws accountable.

In January, new DMV regulations will take effect which result in the suspension of a registered vehicle owner’s registration for three toll violations over the course of five years. Additionally, new MTA regulations which increase fines for non-payment of tolls will go into effect in mid-February.

"Open road tolling streamlines commutes, reduces inconvenience, and, along with bolstered security measures and new LED lighting and art, reimagines New York's crossings as part of our infrastructure overhaul to meet the needs of current and future generations of New Yorkers," Governor Cuomo said. "This project is a transformative investment in our future that revolutionizes statewide transportation and helps us build a new New York."

Governor Cuomo also unveiled a new TV ad featuring John Leguizamo highlighting open road tolling and encouraging New Yorkers to sign up for E-Z Pass. The ad is available in English here and here and in Spanish here and here. Additionally, the Governor showcased a new video detailing progress on the New York Crossings Project, and many infrastructure accomplishments across the state. The video is available here and here. 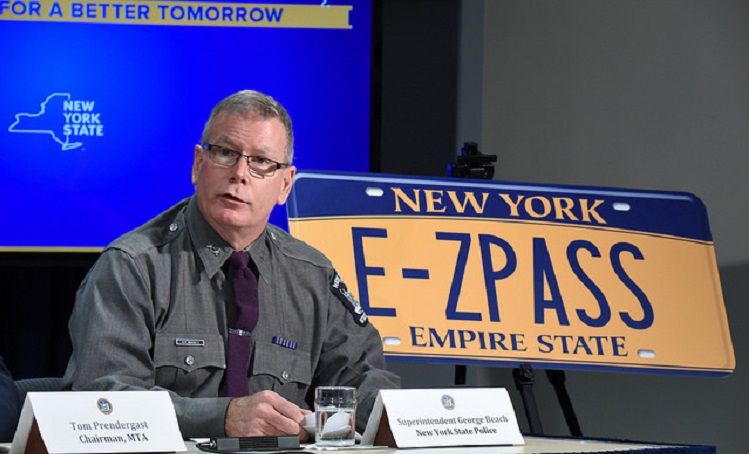 Open road tolling will be completed at all MTA bridges and tunnels by the end of 2017. The schedule is as follows:

With the implementation of open road tolling, state-of-the-art sensors and cameras will be suspended over the highway on structures called "gantries" that read E-ZPass tags and take license plate images, so vehicles no longer have to stop to pay the toll. Vehicles with E-ZPass tags are automatically charged. Non-E-ZPass vehicles have their license plates recorded and a bill is mailed to the registered owner of each vehicle every 30 days. Customers who pay tolls by mail will pay the same toll rate as previously paid by cash customers, and E-ZPass customers with New York Service Center tags will continue to get at least a 30 percent discount. E-ZPass tags should be mounted inside the vehicle’s front windshield. Open road tolling has been successfully tested on the West Side of Manhattan.

Open road tolling is projected to save commuters up to 21 hours of drive time every year. Additionally, it reduces emissions and significantly decreases amount of fuel burned by drivers, who will no longer have to stop and start waiting to pay tolls. This will conserve approximately one million gallons of fuel and save $2.3 million each year. The MTA has introduced a number of programs to make it easy for drivers to pay their tolls. Customers can sign up for E-ZPass and save 30 to 50 percent on MTA tolls at MTA.info/E-ZPass even if they do not own a car. Drivers who receive a tolling bill in the mail can pay it online at tollsbymailny.com, by mail, over the phone, or in-person.

Thomas F. Prendergast, MTA Chairman and CEO, said, “These improvements will enhance traffic flow, reduce congestion, and decrease commute times making it safer for New Yorkers to get where they need to go. The accelerated schedule we are undertaking to modernize all of our facilities in 2017 underscores the Governor’s commitment to investing in New York's transportation network to meet the needs of a growing city.”

To make sure that all users of MTA Bridges and Tunnels toll facilities pay their fair share, a series of enforcement measures are in place to tackle chronic toll scofflaws. New York is deploying 150 State Troopers to key checkpoints to crack down on chronic toll evaders and enhance public safety.

Customers who do not pay their tolls are subject to $50 violation fees, car registration suspensions, and other enforcement actions. Late fees accrue if an initial toll bill is unpaid. Beginning in February 2017, the violation fee will be increased to $100 at the Robert F. Kennedy, Bronx-Whitestone, Throgs Neck and Verrazano-Narrows Bridges and the Queens Midtown and Hugh L. Carey Tunnels. The violation fee will remain $50 at the Marine Parkway, Cross Bay, and Henry Hudson Bridges. For commercial vehicles, failure to pay toll fees in the amount of $200 or more within 5 year period will also result in Suspension of Registration.

At each crossing, and at structurally sensitive points on bridges and tunnels, advanced cameras and sensors are being installed to read license plates, regardless of lighting conditions or the vehicle's speed. Every vehicle that passes through a MTA bridge or tunnel will have their license place scanned, and the technology will instantly cross-check the vehicle's license plate number with the list of suspended registrations and send an alarm to the on-duty Trooper and Bridge and Tunnel Officers in a matter of seconds.

Security teams of State Police and National Guard will work with MTA Bridge and Tunnel Officers at the crossings to ensure public safety. Special barricade trucks will be positioned at the crossings to serve as mobile barriers in the event of an emergency.

In addition to making the commute easier for drivers, Governor Cuomo’s “New York Crossings Project” will reconfigure toll plazas into modern transportation gateways. Plaza walls will be transformed by veils that shield security personnel and equipment, while acting as LED message boards. Intercept vehicles will be stationed behind the veil and security personnel will have line-of-sight monitoring portals. While plaza redesign will vary, each automated tolling structure on MTA-operated bridges and tunnels will be covered with a decorative artwork presenting a “wave” effect. The wave will be constructed from chainmail fabric which moves with the wind. This concept is currently being tested at the Queens Midtown Tunnel.

LED lighting will be adopted on all MTA bridges and tunnels. LED lights use 40 to 80 percent less power and last six times longer than other types of roadway lighting. In addition to costing less and lasting significantly longer, LED lights can be programmed into different colors and patterns.

The New York Crossings Project will lead the nation by encompassing all MTA-operated bridges and tunnels in New York City, plus the George Washington Bridge. "The City That Never Sleeps," a dusk to dawn lighting schedule, will illuminate these crossings with spectacular, multi-color light shows that will be visible for miles. Illuminating New York's already awe-inspiring structures will transform them into international tourist attractions with the potential to drive additional tourism revenue. LED installations are also set to begin next month.