One driver is accused of working his horse for four days while it had an injured leg and was struggling to pull the carriage. 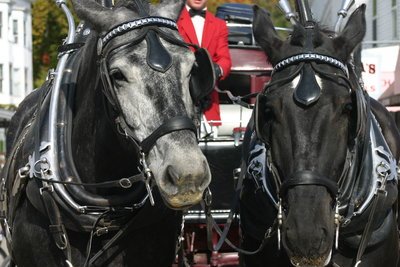 A Central Park horse carriage driver has been charged with abusing a working animal after forcing his horse to work for days on an injured leg.

NYPD officers approached the driver, Saverio Colarusso, Wednesday night after they allegedly saw him driving his horse, Blondie, while the horse was limping.  The officers said that the horse was visibly distressed, and they soon learned that Colarusso had been driving the horse while it had the injury for the past four days.

Carriage industry spokeswoman Christina Hanson said to CBS News that the injury was most likely a common hoof infection caused by snow and road salt.  Blondie’s owner has since suspended Colarusso, pending the outcome of the investigation.

According to Hanson, if the carriage driver is found guilty of abuse, it would be the first instance of animal cruelty in the history of New York City’s carriage industry.

Though the carriage industry has a relatively clean past, there are still many opponents of the use of horses for horse-drawn carriages in New York City.

“New York City carriage horses live and work under conditions far removed from what nature intended and humanity dictates. The ASPCA believes that carriage horses were never meant to operate in today's urban setting,” says the activist group on their webpage.

According to the ASPCA, carriage horses are allowed to work nine hours a day, seven days a week.  Furthermore, they argue that the laws to keep horses safe include loopholes, such as the rule that horses cannot work in temperatures above 90 degrees Fahrenheit or 18 degrees Fahrenheit and below, but no adjustment is made in the measurement for humidity index or wind chill.

If convicted of animal abuse, Colarusso may spend up to a year behind bars.