Hauppauge Pharmaceutical Company Among Most Recent Additions to Suffolk Program. 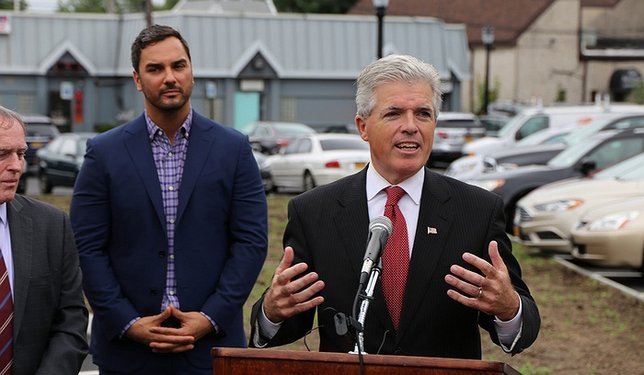 Suffolk County, NY - December 18, 2018 - Suffolk County Executive Steve Bellone today announced that the number of companies participating in Suffolk County’s Foreign Trade Zone #52 (FTZ) have doubled from three to six in 2018. The addition of LNK International, a multi-million dollar pharmaceutical company that employs more than one thousand workers on Long Island, is the third company looking to benefit from Suffolk’s Foreign Trade Zone designation this year.
“Our trade zone is a crown jewel in Suffolk County for local companies who do business internationally,” said Suffolk County Executive Bellone. “Reductions, deferment or elimination of tariffs through Foreign Trade Zone designation can significantly impact their bottom lines which creates a positive benefit to the entire region’s economy. It’s a win for Suffolk businesses, a win for the County and a win for all of Long Island.”
Theresa Ward, Suffolk County Commissioner of the Department of Economic Development and Planning, said: “FTZ #52, serves as a valuable business development tool for the County that helps retain existing companies, and encourages business to relocate here. It allows state-side companies to remain competitive in the global marketplace.” The Economic Development and Planning Department is responsible for the administration and management of the FTZ #52 program.
The Foreign Trade Zone is a program regulated by the U.S. Department of Commerce whose companies operate in a FTZ function under the supervision of U.S. Customs and Border Protection. The inclusion primarily allows companies regularly engaged in import/export activities located in, or looking to relocate to, Suffolk County the opportunity to defer, reduce or eliminate tariffs on merchandise located within an FTZ. Suffolk County does not charge any fees associated with participation in FTZ #52. The types of activities allowed in a FTZ include assembling, exhibiting, manufacturing, warehousing and more, however retail trade is prohibited.
Foreign Trade Zone #52, established in 1979, is the only FTZ on Long Island, and one of more than 200 across the United States. The Town of Islip Foreign Trade Zone Authority located at Long Island MacArthur Airport, which acts as a magnet site, was established in 1981. Changes in the federal program in 2013 allow Suffolk County to bring the trade zone to a company at their location. A new subzone has been formed for LNK, Inc. that includes eight buildings in the Hauppauge Industrial Park.
FTZ #52 currently includes the magnet site at Long Island MacArthur Airport and six Suffolk County businesses, with three receiving inclusion in 2018: Advanced Optowave Corporation, LNK International, Inc. and AMC Technology, Inc. These companies join Estee Lauder, Marchon Eyewear, Inc. and International Warehouse Group.  In 2017, the total value of shipments in FTZ #52 was $19,970,940, and experts for the County anticipates that number to grow with more companies participating.