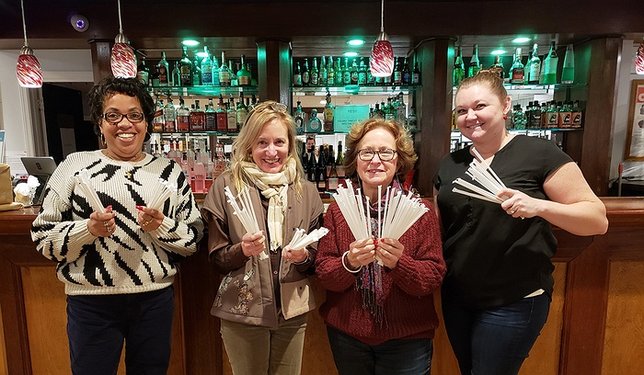 Sag Harbor, NY - December 18, 2018 - Bay Street Theater & Sag Harbor Center for the Arts is pleased to announce that it is putting out the challenge to all of Main Street, Sag Harbor to eliminate single-use plastic water bottles and plastic straws. Bay Street will be kicking-off this effort in 2019 at the first of its’ upcoming Friday Night Flicks film series beginning in February.
To launch the campaign, Bay Street will join forces with the Group for the East End, with the showing of the film STRAWS, a film by Linda Booker and narrated by Oscar winner Tim Robbins on Friday, February 1 at 8 pm. The film presentation will be followed by a talk back with a member from the organization and Bay Street’s Executive Director, Tracy Mitchell. The documentary explains the wreckage made of wildlife in the seas and other ramifications due to plastic straws. (Since the film is under forty minutes in length, an additional group of shorts will also be shown that evening called 60 MiNueTs, Toxic!  This series on environmental health issues was produced by Public Interest Media Group and will also be followed by a talkback with local resident, Susan Lamontagne.) Tickets for this evening are available at baystreet.org by calling the Box Office at 631-725-9500.
“While getting rid of straws and other single use plastics is not a new idea, it was one that struck me again during a recent trip to Canada”, says Mitchell. “While visiting a major tourist area and having forgotten my own reusable water bottle that I normally travel with, I asked to purchase a bottle of water. I was quickly informed that none were sold, and that one could purchase only a metal reusable water bottle and fill it at the refilling station. I must admit, my first reaction was to be a bit annoyed. But that was the ‘aha’ moment. We, all of us, need to do a better job of changing our own habits, and that we need to begin, as always, right in our own backyard.”
But no one will be forced to buy a swell-type bottle for a drink of water. Once financing is secured, Bay Street Theater will replace its current water fountain, and install a new water fountain, complete with a refilling station for use with reusable water bottles in the upcoming new year. Bay Street will also sell reusable bottles for those who need them. Some paper straws for those with disabilities or the very young (who may still require the use of an actual straw) will be made available upon request only.
As for the old straws, maybe there will be a use for them. “Perhaps,” says Mitchell, “we can make some type of artwork out of the straws that we have left?  Maybe there are some artists or students out there who wish to help? We look forward to working with everyone on Main Street to think creatively to help our environment in this one small, but hopefully meaningful way.”
Bay Street is still looking for alternatives to the use of its single-use eco-plastic drink cups, which Mitchell believes are still an issue. “As we don’t have the space or permits for dishwashing of glass or other types of drink cups, we’ll still be looking for alternatives on that issue. But the removal of plastic water bottles and straws will be a good first step,” says Mitchell.
Bay Street Theater and Sag Harbor Center for the Arts is a year-round, not-for-profit professional theater and community cultural center which endeavors to innovate, educate, and entertain a diverse community through the practice of the performing arts. We serve as a social and cultural gathering place, an educational resource, and a home for a community of artists.