Cmdr. John Barrientos assumed command of the crew of the USS Omaha at Naval Base San Diego, Dec. 7. 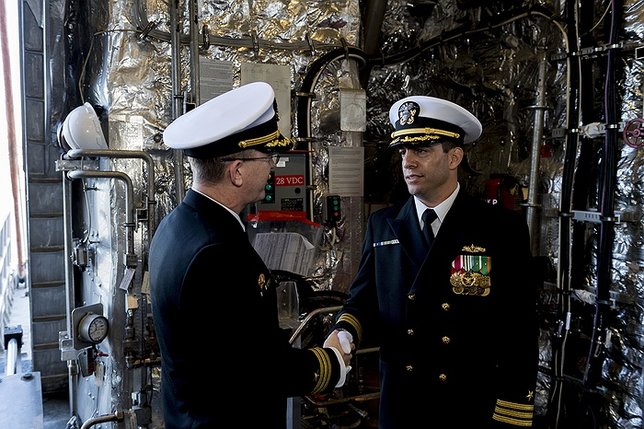 Brentwood, NY - December 17, 2018 - USS Omaha (LCS 12) Blue Crew held a change of command in the ship’s mission bay while pierside at Naval Base San Diego, Dec. 7.
Cmdr. John Barrientos, a native of Brentwood, New York, assumed command of the crew from Cmdr. Michael Toth, a native of North Ridgeville, Ohio, who completed a successful 27-month command tour with Omaha Blue.
Toth’s tour aboard the littoral combat ship Omaha included receiving delivery of the ship from Austal USA in Mobile, Alabama; leading the crew on Omaha’s maiden voyage, which included transiting the newest locks of the Panama Canal; and bringing the ship into San Diego for commissioning and  making preparations for Combat Systems Ship Qualification Trials and Final Contract Trials. The crew successfully demonstrated the ship’s combat and engineering systems through both events prior to entering dry dock where Omaha received repairs, upgrades, and modifications.
“Having command of Omaha and her crew has been the greatest experience of my naval career,” said Toth. “Bringing a new ship to life is a demanding task and this crew has exceeded all expectations along the way. I could not be more proud of their achievements and they have certainly made a lasting impact on the future of Omaha and the LCS program.”
Toth’s next tour will be at the Joint Staff in Norfolk, Virginia.
Barrientos, who most recently served as the crew’s executive officer, said he was honored to assume command of such an accomplished crew.
"As executive officer, I have had the opportunity to be with these outstanding Sailors since Omaha’s delivery,” said Barrientos. “I look forward to all the exciting times ahead with this phenomenal crew."
Omaha Blue is currently off hull. The Blue/Gold crew rotation provides an adequate respite between deployments to ensure mandatory training blocks are built into the schedule for the minimally manned crews.
LCS vessels are high-speed, agile, shallow draft, mission-focused surface combatants designed for operations in the littoral environment, yet fully capable of open ocean operations. As part of the surface fleet, LCS has the ability to counter and outpace evolving threats independently or within a network of surface combatants. Paired with advanced sonar and mine hunting capabilities, LCS provides a major contribution, as well as a more diverse set of options to commanders, across the spectrum of operations.
Get more information about the Navy from US Navy Facebook or Twitter.