With a large number of military men and women returning home and suffering from Post Traumatic Stress Disorder, Guardians of Rescue wanted to do something to help. 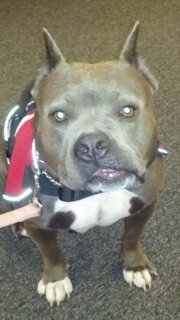 Smithtown, NY - December 17, 2014 - Guardians of Rescue, a national organization dedicated to the welfare of animals rescued Jada, a 3 year old pit bull living in a dirt crawl space under the foundation of a home on a frigid winter day in 2013. That was her life, or more appropriately, her existence. Now, on December 23, 2014, Jada, has become a fully trained service dog through their Paws of War Program, and will be placed with local veteran.

“When we found Jada a year ago, she’d been used for breeding and lived outside. She had a broken jaw that healed crooked and she was found huddled in a dirt crawl space. We took her in and as we got to know her, we saw what an amazing personality she has,” affirms Dori Scofield, vice-president of Guardians of Rescue. “We decided to put her into our Paws of War Program and train her to become a service dog for a veteran suffering from PTSD. She has proven to be amazingly smart, and also an inspiration for forgiveness and survival!"

With a large number of military men and women returning home and suffering from Post Traumatic Stress Disorder, Guardians of Rescue wanted to do something to help. Guardians of Rescue started the “Paws of War” program, which takes the time to rescue dogs and train them to suit the needs of those with PTSD and TBI and match them to a veteran. Jada will go to, Air Force Sergeant Duane R. Franzone for Christmas. Duane will now join the ranks of dozens of service dogs and veterans who have been united through Guardians of Rescue and are now on the road to recovery.

On December 23, 2014, Jada will finally meet her new owner and pal, Duane R. Franzone, a former sergeant in the Air Force, at the Save-a-Pet facility in Long Island, New York. Franzone spent 12 1/2 years in the Air Force, including deployment in Afghanistan, before being medically retired and now suffers from PTSD that has effects on his daily life.

“I’m thrilled to be able to welcome Jada into my home. I hope that she can help me with my PTSD and I can help her by providing her a home and love,” affirms Sgt. Franzone. “It’s the best Christmas present I could ask for.”

“The holidays can be particularly rough for PTSD veterans because of the increase in crowds, noise and activities,” affirms Scofield. “We want Jada and Duane to be able to be together for the holidays to help each other, especially after all that Duane has sacrificed for our country, he deserves to feel safe and loved.”

To learn more or to make a donation, visit the website.