The fight to reauthorize funds for 9/11 survivors by extending the James L. Zadroga 9-11 Health & Compensation Act (a.k.a. Zadroga Act) is expected to pass later this week after a long fight. 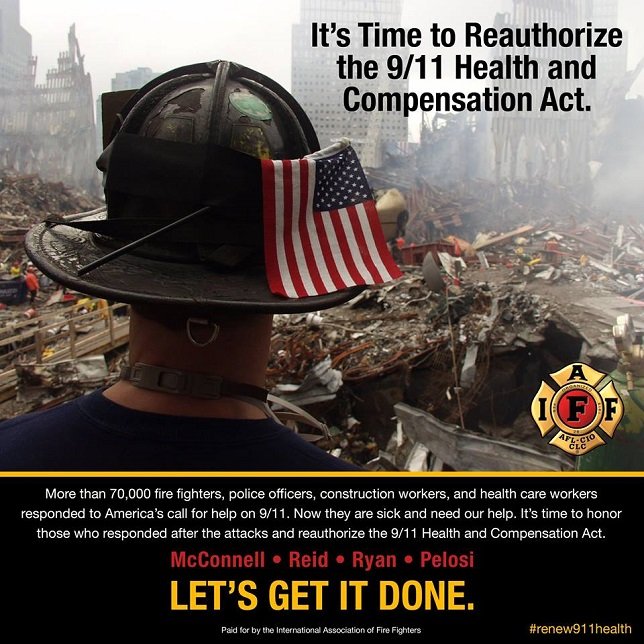 Many first responders lost their lives on 9-11, more have since died from cancers and rare diseases or now suffer from serious illnesses from toxic exposure at the site.

Photo by: International Association of Fire Fighters, via Facebook.

New York, NY - December 16, 2015 - It’s been a long fight for the first responders who risked their lives during the 9-11 attacks, but finally there is a light at the end of the tunnel with news of a must-pass legislation for the extension and funding to the James L. Zadroga 9-11 Health & Compensation Act (a.k.a. Zadroga Act).

The Zadroga Act is a bill that was established to provide health care to those sickened by toxins in the air around Ground Zero after the 9-11 attacks. However, it expired in the fall and required more funding. As a result of the expected extension to be approved later this week, health care and the necessary funding to first responders will continue.

"The eyes of our 300,000 members across the country have been focused on Washington, where we have been waiting for Congress to provide the funding necessary to provide the health care that first responders deserve," said Harold A. Schaitberger, General President of the International Association of Firefighters Association (IAFF) in a press release. "The next terrorist attack could strike anywhere. It is extremely important that our members know our nation's leaders will be there for them should they need this type of protection. I want to thank the leadership of both parties for coming together in agreement on this bill and funding."

The news of the expected approval came following an agreement reached late Tuesday evening between Congressional leaders and the White House.

The vote with the House and Senate is expected on Thursday.

The extension means first responders will have the health benefit portion of it through 2090. The Sept 11th Victim Compensation Fund will get extended an additional five years and adds $4.6 billion to pay claims, according to reporting from NBC News.

"Our Fire Officers were on the front lines on that horrific day when terrorists attacked our city and our nation and in the months that followed," said Chief James Lemonda, President of the Uniformed Fire Officers Association (UFOA). "Many of our members have suffered and continue to suffer from the effects of working at Ground Zero. Our nation has a responsibility to provide the care they need, just as we provide for our wounded soldiers. We must never forget what they did, just as we must never forget the lives that were lost."

Sen. Kirsten Gillibrand (D-N.Y.) posted on Facebook: “When we pass this funding bill later this week, our heroes will finally have peace of mind knowing the healthcare and compensation they rely on every day will be there as long as they need it. This victory is a testament to the power of the voices of every day Americans to make change.”