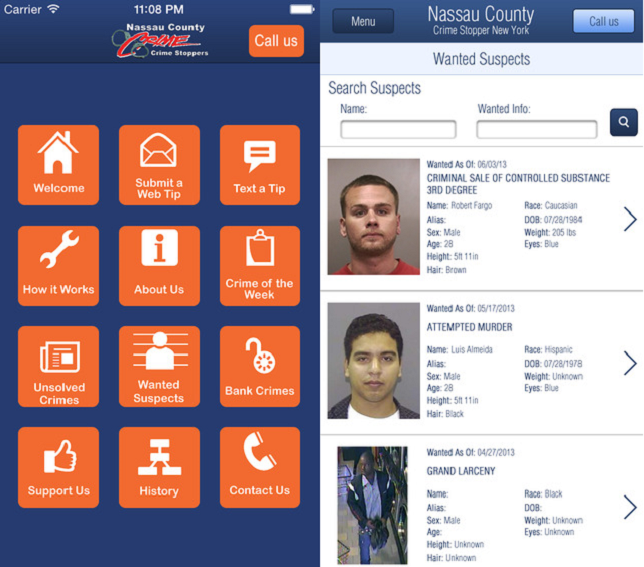 The public can now assist law enforcement by reporting suspicious activity via the Nassau Crime Stoppers app available for smartphones and tablets.

“In 1941, President Franklin Roosevelt asked the American public to keep an eye out for possible espionage and sabotage through a program known as Civil Defense,” said County Executive Mangano. “Today, we deputize social media users by asking them to take a screen shot of social media threats, terror allegiances, recruitment efforts and/or other suspicious behavior and text it via our Nassau Crime Stoppers App! This modern day civil defense has the potential to thwart Terrorist Attacks! It is that important!”

With approximately 850 million active social media users per month, the public can assist law enforcement by reporting suspicious activity via the Nassau Crime Stoppers app available for smartphones and tablets. To do so, download the application by searching “Nassau Crime Stoppers” in the app store and TEXT-A-TIP. Residents should know that analysts in the Nassau County Police Department’s Counter Terrorism Intel Office are proactively monitoring and data-mining social media activity, in partnership with neighboring law enforcement agencies, in an effort to protect the homeland.

“While at the present time there is no known threat to our county, the Nassau County Police Department's Asset Forfeiture and Intelligence Unit is working around the clock with our partners in law enforcement to monitor any potential threats to public safety and thank the public in advance for their assistance,” said Acting Police Commissioner Thomas Krumpter.

Several weeks ago, the Nassau County Police Department intensified patrols throughout local communities and assigned officers from the Bureau of Special Operations and Criminal Intelligence Rapid Response Team to patrol local malls and other soft targets. The department has also conducted anti-terror training exercises and purchased high-powered rifles for response to active shooter and terror situations. The department's Intelligence Unit continues to work around the clock to provide officers with counter-terrorism bulletins.