A portion of Maple Avenue will be dedicated in memory of the late 1st Sergeant Joseph N. Pascarella, Sr. 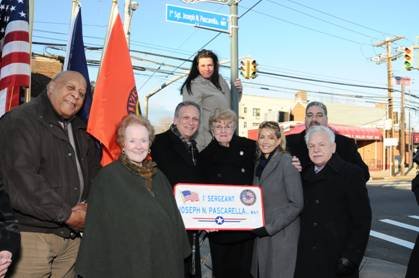 “Today we dedicate this Westbury Street 1st Sgt. Joseph N. Pascarella Sr. Way and ensure that 1st Sergeant Pascarella’s presence will always be with us in the community in which he lived and loved,” said County Executive Mangano.

1st Sergeant Joseph N. Pascarella, Sr. was a Korean War veteran and served in the United States Marine Corps for 28 years. Most recently, Joe served as Executive Director of the Nassau County Veterans Service Agency (VSA) where he led the VSA with the same pride, distinction and patriotism in which he served our nation. Joe’s leadership resulted in our hometown heroes receiving an unprecedented level of benefits, new veteran housing and improved programs for all veterans. Joe will forever be remembered as a loving husband, father, grandfather and patriot. He is survived by his wife, Marion, their five children and eight grandchildren.