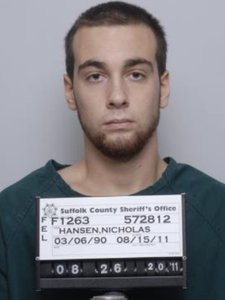 In 2011 a Farmingville resident shot at members of the District Attorney's Heroin Task Force after a botched drug deal at a gas station. On Monday DA Thomas Spota announced that Nicholas Hansen has been charged with Attempted Murder for the shooting.

“As the detectives assigned to the task force surrounded his car and blocked him in after Hansen’s arrival at the gas station north of Exit 41 of the expressway, the defendant suddenly emerged from his car and began firing, emptying his .38 at them,” DA Spota said.  “One of our task force members, a New York State Police Investigator with 15 years on the job, crouched in the open, ten feet away, and returned fire.”

During the standoff with authorities the 23-year-old was struck four times but recovered from the wounds.

His trial began on December 2nd in the Central Islip court house and took two days to deliberate. Hansen now faces up to 25 years for the attempted murder charge, another 25 for the criminal use of a firearm charge, a possible 15 years added on for the gun charges, and a few more years tacked on for the sale of a controlled substance.

“The members of this task force – DA detectives, Suffolk Sheriff's Deputy Investigators, State Police Investigators, Suffolk Police detectives – encounter situations with the potential of turning deadly in a matter of seconds,” District Attorney Spota said.  “In this case, it was a drug dealer with four ounces of cocaine and a loaded .38.  The investigation of drug dealers is the most treacherous police assignment and what happened here on a peaceful summer evening in Holbrook illustrates the peril our task force members put themselves in to eradicate the trafficking of cocaine, heroin, and painkillers.”