Winter Storm to Create Messy Travel along 1,200-Mile Swath of Central US

AccuWeather reports a storm will create dangerous travel conditions across a 1,200-mile swath of the central United States into the weekend. 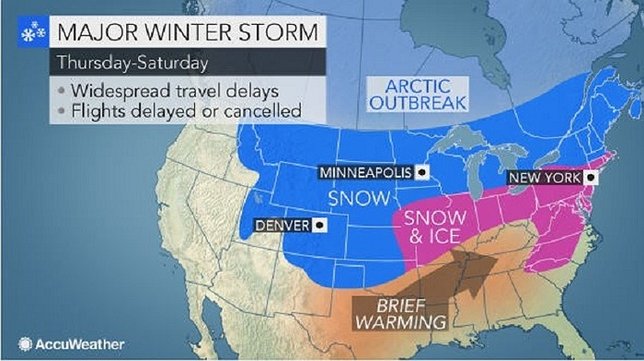 AccuWeather Global Weather Center - December 14, 2016  - AccuWeather reports a storm will create dangerous travel conditions across a 1,200-mile swath of the central United States into the weekend.

Blizzard conditions could develop in major hubs such as Denver and Chicago.

People from the Rockies to the northern Plains and Upper Midwest are bracing for a new round of snow and travel disruptions on the highways and at airports.

"Motorists and airline passengers may want to explore an alternate or more southern route as confidence is high that there will be widespread, major travel disruptions with this storm," AccuWeather Senior Meteorologist Brett Anderson said.

Mostly snow will fall from central and northern Colorado to northern Nebraska, South Dakota, northern Iowa, Minnesota, Wisconsin and central Michigan. Motorists venturing along Interstate 90 should be prepared for snow covering roads, as well as blowing and drifting snow.

The storm also has the potential to spread accumulating snow to parts of the central Plains and the middle Mississippi Valley.

A wintry mix is in store from northern Kansas and southern Nebraska to southern Iowa, northern Missouri, Illinois, Indiana, Ohio and southern Michigan. These areas along the I-70 and I-80 corridors are to face a combination of snow, sleet and freezing rain. This includes the cities of Omaha, Nebraska; Des Moines, Iowa; Kansas City, Missouri; Chicago; Detroit; Indianapolis and Cleveland.

"Parts of the central Plains could be like a skating rink for a time on Friday, due to the icy mix," Anderson said. 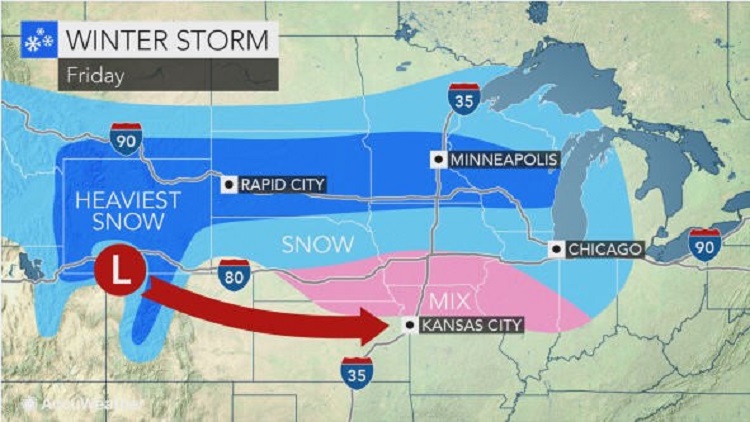 "People should expect treacherous driving conditions for the Friday evening commute around Chicago as snow moves in and becomes heavy," Anderson said. "Heavier snow will reach the Detroit area later Friday night, before changing to an icy mix on Saturday."

Around St. Louis, the worst of the storm is likely to be the tail end, when rain will change to snow and a freeze can occur on Saturday.

The plunging temperatures can cause wet surfaces and slush to freeze rapidly from west to east across the Ohio Valley and lower Great Lakes region during late Saturday night and Sunday.

"The snow, ice and gusty winds anticipated this weekend will likely lead to airline delays and potential cancellations in the major hubs from Denver to Chicago and Detroit," Anderson said.

The plunge of cold air will be rapid and significant as the storm rolls eastward.

"For example, around Denver, the temperature will plummet from the 50s F Friday to below zero by Saturday morning," Anderson said. "The rapid freeze with high winds and heavy snow will create blizzard conditions with major delays likely at Denver International Airport."

During Saturday night, blizzard conditions could also develop around Chicago.

Farther east, the storm will also bring a wintry and icy mix with slippery travel from as far south as the Carolinas to as far north as Maine during the weekend. The storm will bring the first accumulating snow to Washington, D.C. and enough snow to shovel and plow from Philadelphia to New York City and Boston.