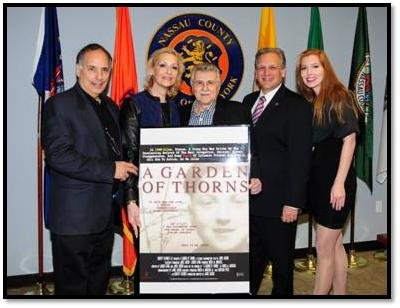 In 2008 Lauren Levine made the acquaintance of celebrity hairstylist, Roger de Anfrasio, also known as, “Roger of New York.” Although Roger entertained his customers with anecdotes of all kinds, he kept his best kept stories secret, those never before told adventures of his boyhood, of the years growing up in Nazi occupied Dijon, France, during WW2. In 2000, Roger self-published a collection of his memoirs, a book he penned for the purpose of reuniting his family, as they had been scattered after the war years. In 2008 Lauren had optioned the book for the purposes of creating a film with veteran screenwriter-director, James Arcuri.

After interviewing Roger for over a year, Lauren was amazed at the fact that for all his heroics, he had never been recognized for his contributions. Lauren wrote to the French government about Roger, and in 2011 The City of Dijon, France honored Roger with France’s highest civilian honor, the prestigious Medal of Honor. At the same time Roger was being honored, Lauren was learning that she had metastatic breast cancer. Motivated by Roger and his story of survival, Lauren realized that she too must survive in order to share Roger’s story through the film, “A Garden of Thorns,” based on the book of the same name.

Lauren Levine would like to spread the message to all women suffering from Breast Cancer that they too can survive and become champions by throwing themselves into pursuing creative projects. Lauren believes that by working on projects that will uplift humanity and make a true positive difference in the world, they will be an “up-stander rather than a bystander.” Lauren believes that, “Just as Roger was one little boy, spying with a pair of binoculars that he stole from a young German officer, one person taking action can change the world.”

For more information on “A Garden of Thorns” visit the website.