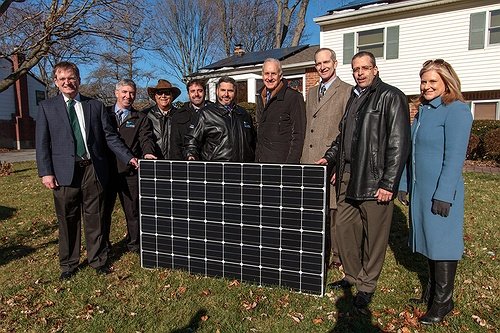 Approximately, 41 percent of all solar systems in New York State have been installed on Long Island, resulting in today’s announcement celebrating PSEG Long Island’s 10,000th customer, Michael Greaves of Huntington. Across Long Island, the customer-sited residential and commercial solar system programs have provided rebates of more than $180 million for a total of 88.44 megawatts (MW) of capacity savings since the program started in 2000. This past April, Governor Cuomo announced a historic $1 billion investment for the NY-Sun Initiative, a statewide program designed to support New York’s vibrant solar economy and ultimately transform the solar market into a self-sustaining industry across New York.

“With just under half of the solar electric installations in New York State and the largest solar electric farm in the eastern United States, Long Island residents and business leaders are seeking community-based solutions to grow the clean energy economy at an even more rapid pace,” said Richard Kauffman, Chairman of Energy and Finance for New York. “We are pleased that PowerUp Long Island and the NY-Sun initiative are delivering on their promise to encourage and support local communities to reinvent how clean, efficient and affordable electricity for the people of Long Island and New York is produced and distributed.”

“Solar installations on Long Island have been growing at a rapid pace thanks to the continued funding from the NY-Sun Incentive Program,” said Mike Voltz, Director of Energy Efficiency and Renewables, PSEG Long Island. “The installation of the 10,000th solar PV system represents an increasing awareness for the control our customers can take over their energy future, helping everyone work toward energy independence through the use of alternative energy technologies.”

Residential and commercial solar customers across Long Island and the Rockaways are reaping the benefits of the clean and renewable energy the sun provides. Since partnering with New York State Energy Research and Development Authority (NYSERDA) to administer the NY-Sun Incentive Program, PSEG Long Island has processed approximately 3,000 applications. The 15,000th PV installation on Long Island may be seen in 2015.

Residential energy use is the largest contributor to Long Island’s carbon footprint. Already, ten of the 13 Long Island towns have adopted energy conservation codes that call for new homes to be 20 percent more efficient than state code and require third-party verification of home performance. Long Island’s key economic assets are a well-educated and productive workforce, its proximity to New York City, premier research and educational institutions, a high quality of life and treasured natural resources ensure that solar and other clean energy solutions will continue to grow at a rapid pace in the region.

"Long Island's impressive growth in solar power is testament to the success of Governor Cuomo's NY-Sun Initiative here and throughout the state," said John B. Rhodes, President and CEO, NYSERDA. "New York's commitment to solar investment has helped make this renewable resource more attractive to residents and businesses while helping the state move toward having a sustainable solar industry. Two years after Superstorm Sandy, Long Island is becoming a model for the benefits of renewable energy and the resiliency that it adds to the State’s energy system."

“Long Island has now achieved its 10,000th solar installation. This milestone has been made possible through the commitment made by the State with its many programs to promote solar. These programs, including the unprecedented NY-Sun initiative, have given most homeowners access to install solar by making it more affordable than ever before,” said Carlo Lanza, Chairman, Long Island Solar Energy Industries Association, and Vice President, Harvest Power LLC.

“SUNation Solar is proud to participate in this event with Governor Cuomo’s energy leadership team, NYSERDA and the PSEG Long Island team. Through 12 years of collaboration we have built a thriving new industry on Long Island and continue to add skilled high quality jobs to our fellow Long Islanders. With innovative programs, financing solutions and dedication to a greener, better Long Island the goals of Governor Cuomo’s NY-Sun initiative are within reach. Today we celebrate the 10,000th residential solar installation on Long Island and the 12 years it took SUNation to get here,” said Scott Maskin, President, SUNation.

“Going solar has been a wise choice. The installation was completed in August and preliminary data already suggest that we’re on target to reach our goals of significantly reducing our electric bill, lowering our carbon output and helping to pave the way for a cleaner environment,”said Michael Greaves, the 10,000th solar installation customer. “We appreciate the great results our contractor SUNation provided, as well as PSEG Long Island rebates, and New York and U.S. support and initiatives to help make it all possible.”

Earlier this year, Governor Cuomo announced additional funding of $60 million made available through the statewide NY-Sun initiative administered by NYSERDA to support the continued success of the solar industry on Long Island.

PSEG Long Island was instrumental in the MW Block system design process, as it reviews and approves applications received by NYSERDA for Long Island and Rockaway customers and it works with installers on Long Island to approve projects, verify installations and inform NYSERDA when the projects are ready for payment. NYSERDA performs these tasks for the other two regions of the State.

NY-Sun Initiative is a $1 billion initiative of Governor Cuomo’s to advance the scale-up of solar and move the state closer to having a sustainable, self-sufficient solar industry. With this initiative, New York’s role as a leader and first mover in shaping the future of energy remains firmly in place. By developing innovative market solutions, the State is delivering on Governor Cuomo’s commitment to transform the energy industry into a more resilient, clean, cost-effective and dynamic system. Working with State, citizen and industry stakeholders, New York’s energy policy is moving to a more market-based, decentralized approach. This means preserving the environment, decreasing energy costs, and creating opportunities for economic growth for current and future generations of New Yorkers. In advancing these new energy systems and solutions, New Yorkers will have improved energy affordability and efficiency without sacrificing the ability to live in a cleaner, resilient and more sustainable environment.